Characterization of adobe blocks: point-load assessment as a complementary study of damaged buildings and samples 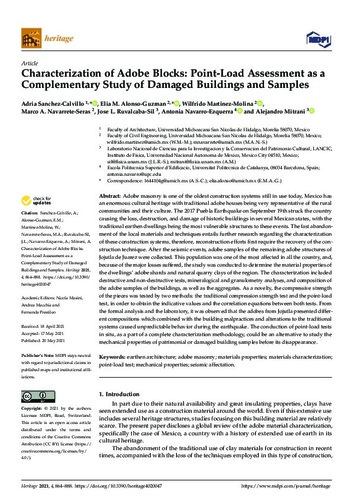 Sánchez Calviño, Adria
Alonso Guzmán, Elia M.
Martínez Molina, Wilfrido
Navarrete Seras, Marco A.
Ruvalcaba Sil, José Luis
Mitrani, Alejandro
Document typeArticle
Rights accessOpen Access
Abstract
Adobe masonry is one of the oldest construction systems still in use today, Mexico has an enormous cultural heritage with traditional adobe houses being very representative of the rural communities and their culture. The 2017 Puebla Earthquake on September 19th struck the country causing the loss, destruction, and damage of historic buildings in several Mexican states, with the traditional earthen dwellings being the most vulnerable structures to these events. The fast abandonment of the local materials and techniques entails further research regarding the characterization of these construction systems, therefore, reconstruction efforts first require the recovery of the construction technique. After the seismic events, adobe samples of the remaining adobe structures of Jojutla de Juarez were collected. This population was one of the most affected in all the country, and, because of the major losses suffered, the study was conducted to determine the material properties of the dwellings’ adobe shards and natural quarry clays of the region. The characterization included destructive and non-destructive tests, mineralogical and granulometry analyses, and composition of the adobe samples of the buildings, as well as the aggregates. As a novelty, the compressive strength of the pieces was tested by two methods: the traditional compression strength test and the point-load test, in order to obtain the indicative values and the correlation equations between both tests. From the formal analysis and the laboratory, it was observed that the adobes from Jojutla presented different compositions which combined with the building malpractices and alterations to the traditional systems caused unpredictable behavior during the earthquake. The conduction of point-load tests in situ, as a part of a complete characterization methodology, could be an alternative to study the mechanical properties of patrimonial or damaged building samples before its disappearance.
CitationNavarro Ezquerra, A. [et al.]. Characterization of adobe blocks: point-load assessment as a complementary study of damaged buildings and samples. "Heritage", 20 Maig 2021, vol. 4, núm. 2, p. 864-888.
URIhttp://hdl.handle.net/2117/346420
DOI10.3390/heritage4020047
ISSN2571-9408
Publisher versionhttps://www.mdpi.com/2571-9408/4/2/47
Collections
Share: