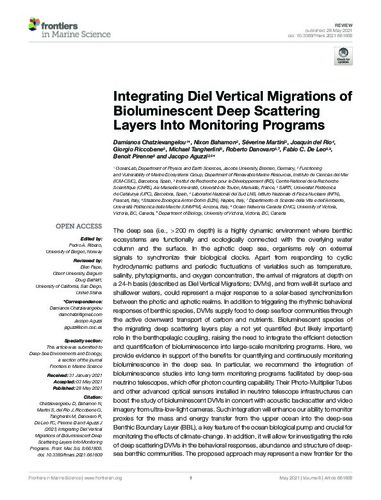 Except where otherwise noted, content on this work is licensed under a Creative Commons license : Attribution 3.0 Spain
ProjectREDES DE SENSORES SUBMARINOS AUTONOMOS Y CABLEADOS APLICADOS A LA MONITORIZACION REMOTA DE INDICADORES BIOLOGICOS (AEI-TEC2017-87861-R)
Abstract
The deep sea (i.e., 200 m depth) is a highly dynamic environment where benthic ecosystems are functionally and ecologically connected with the overlying water column and the surface. In the aphotic deep sea, organisms rely on external signals to synchronize their biological clocks. Apart from responding to cyclic hydrodynamic patterns and periodic fluctuations of variables such as temperature, salinity, phytopigments, and oxygen concentration, the arrival of migrators at depth on a 24-h basis (described as Diel Vertical Migrations; DVMs), and from well-lit surface and shallower waters, could represent a major response to a solar-based synchronization between the photic and aphotic realms. In addition to triggering the rhythmic behavioral responses of benthic species, DVMs supply food to deep seafloor communities through the active downward transport of carbon and nutrients. Bioluminescent species of the migrating deep scattering layers play a not yet quantified (but likely important) role in the benthopelagic coupling, raising the need to integrate the efficient detection and quantification of bioluminescence into large-scale monitoring programs. Here, we provide evidence in support of the benefits for quantifying and continuously monitoring bioluminescence in the deep sea. In particular, we recommend the integration of bioluminescence studies into long-term monitoring programs facilitated by deep-sea neutrino telescopes, which offer photon counting capability. Their Photo-Multiplier Tubes and other advanced optical sensors installed in neutrino telescope infrastructures can boost the study of bioluminescent DVMs in concert with acoustic backscatter and video imagery from ultra-low-light cameras. Such integration will enhance our ability to monitor proxies for the mass and energy transfer from the upper ocean into the deep-sea Benthic Boundary Layer (BBL), a key feature of the ocean biological pump and crucial for monitoring the effects of climate-change. In addition, it will allow for investigating the role of deep scattering DVMs in the behavioral responses, abundance and structure of deep-sea benthic communities. The proposed approach may represent a new frontier for the study and discovery of new, taxon-specific bioluminescence capabilities. It will thus help to expand our knowledge of poorly described deep-sea biodiversity inventories and further elucidate the connectivity between pelagic and benthic compartments in the deep-sea.
CitationChatzievangelou, D. [et al.]. Integrating diel vertical migrations of bioluminescent deep scattering layers into monitoring programs. "Frontiers in marine science", 28 Maig 2021, vol. 8, p. 661809:1-661809:14.
URIhttp://hdl.handle.net/2117/346408
DOI10.3389/fmars.2021.661809
ISSN2296-7745
Publisher versionhttps://www.readcube.com/articles/10.3389/fmars.2021.661809
Collections
Share: