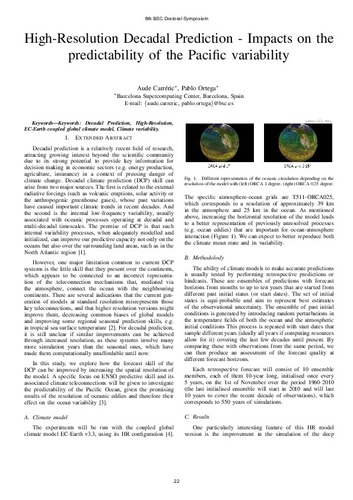 Show full item record
Carréric, Aude
Ortega, Pablo
Document typeConference report
PublisherBarcelona Supercomputing Center
Rights accessOpen Access
All rights reserved. This work is protected by the corresponding intellectual and industrial property rights. Without prejudice to any existing legal exemptions, reproduction, distribution, public communication or transformation of this work are prohibited without permission of the copyright holder
Abstract
Decadal prediction is a relatively recent field of research, attracting growing interest beyond the scientific community due to its strong potential to provide key information for decision making in economic sectors (e.g. energy production, agriculture, insurance) in a context of pressing danger of climate change. Decadal climate prediction (DCP) skill can arise from two major sources. The first is related to the external radiative forcings (such as volcanic eruptions, solar activity or the anthropogenic greenhouse gases), whose past variations have caused important climate trends in recent decades. And the second is the internal low-frequency variability, usually associated with oceanic processes operating at decadal and multi-decadal timescales. The premise of DCP is that such internal variability processes, when adequately modelled and initialized, can improve our predictive capacity not only on the oceans but also over the surrounding land areas, such as in the North Atlantic region [1]. However, one major limitation common to current DCP systems is the little skill that they present over the continents, which appears to be connected to an incorrect representation of the teleconnection mechanisms that, mediated via the atmosphere, connect the ocean with the neighbouring continents. There are several indications that the current generation of models at standard resolution misrepresents those key teleconnections, and that higher resolution versions might improve them, decreasing common biases of global models and improving some regional seasonal prediction skills, e.g. in tropical sea surface temperature [2]. For decadal prediction, it is still unclear if similar improvements can be achieved through increased resolution, as these systems involve many more simulation years than the seasonal ones, which have made them computationally unaffordable until now. In this study, we explore how the forecast skill of the DCP can be improved by increasing the spatial resolution of the model. A specific focus on ENSO predictive skill and its associated climate teleconnections will be given to investigate the predictability of the Pacific Ocean, given the promising results of the resolution of oceanic eddies and therefore their effect on the ocean variability [3].
CitationCarréric, A.; Ortega, P. High-resolution decadal prediction - impacts on the predictability of the Pacific variability. A: . Barcelona Supercomputing Center, 2021, p. 22-23.
URIhttp://hdl.handle.net/2117/346252
Collections
Share: