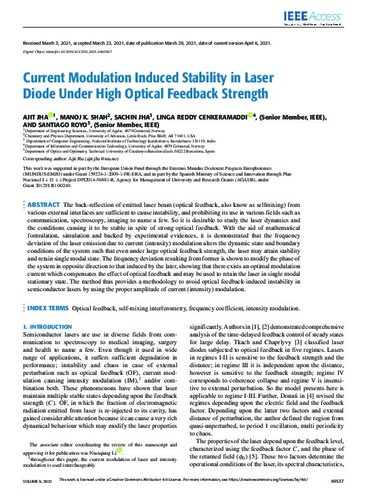 Except where otherwise noted, content on this work is licensed under a Creative Commons license : Attribution 3.0 Spain
Abstract
The back-reflection of emitted laser beam (optical feedback, also know as selfmixing) from various external interfaces are sufficient to cause instability, and prohibiting its use in various fields such as communication, spectroscopy, imaging to name a few. So it is desirable to study the laser dynamics and the conditions causing it to be stable in spite of strong optical feedback. With the aid of mathematical formulation, simulation and backed by experimental evidences, it is demonstrated that the frequency deviation of the laser emission due to current (intensity) modulation alters the dynamic state and boundary conditions of the system such that even under large optical feedback strength, the laser may attain stability and retain single modal state. The frequency deviation resulting from former is shown to modify the phase of the system in opposite direction to that induced by the later, showing that there exists an optimal modulation current which compensates the effect of optical feedback and may be used to retain the laser in single modal stationary state. The method thus provides a methodology to avoid optical feedback-induced instability in semiconductor lasers by using the proper amplitude of current (intensity) modulation.
CitationJha, A. [et al.]. Current modulation induced stability in laser diode under high optical feedback strength. "IEEE access", 1 Gener 2021, vol. 9, p. 49537-49546.
URIhttp://hdl.handle.net/2117/346231
DOI10.1109/ACCESS.2021.3069387
ISSN2169-3536
Publisher versionhttps://ieeexplore.ieee.org/document/9388644
Collections
Share: