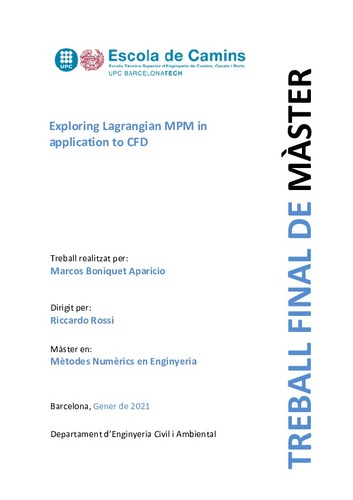 Document typeMaster thesis
Rights accessOpen Access
Abstract
The Material Point Method (MPM) [Sulsky et al. 1995] [1] combines a La-grangian description of a domain using a set of particles with a computational mesh used to solve numerically the system of governing equations. At each time step, the governing equations are solved on the nodes of the computa-tional grid, while history dependent variables and material information are saved on the particles for the entire deformation process. The Finite Element Method (FEM) has a counterpart which has beendeveloped in the last decades, the so called Meshless Methods (MMs) . Asa start, this project studies one of these methods, the Moving Least Squares(MLS) method, a previous step to combine it with the MPM, through Python programming language. First, it is tested in depth the MLS method for a 2D domain and its exact approximation cases for different consistency orders with different functions.It is considered either a structured or a random particle distribution, analyz-ing the optimal weight functions to be used and different dilation parameters. Next, MLS is to be applied as a solving solution for Partial Differen-tial Equation (PDE) systems for a 10x10m square domain submitted to self weight. Two cases are studied, depending on the constitutive model, one for Plane Stress and one for Stokes, being the latter a particular considera-tion of Navier-Stokes system of equations in which the convective terms areneglected in front of the viscous terms, thus for this Computational Fluid Dynamics (CFD) simulation high viscosity is implied for the momentum conservation equation. Plane Stress case is compared to the FEM case, for lateral fixed and base fixed cases, while Stokes case is only computed through MLS, being considered steady and transient cases, both for based fixed. A stabilization method for first and also for second order derivative terms is applied through Galerkin Least Squares (GLS) method. In addition, the software Comsol Multiphysics®is used as a tool to compare results obtained to an industry well-established FEM program andas a guide for the project
SubjectsFinite element method, Fluid dynamics, Elements finits, Mètode dels, Dinàmica de fluids
DegreeMÀSTER UNIVERSITARI EN MÈTODES NUMÈRICS EN ENGINYERIA (Pla 2012)
URIhttp://hdl.handle.net/2117/346184
Collections
Share: