About the oscillatory possibilities of the dynamical systems 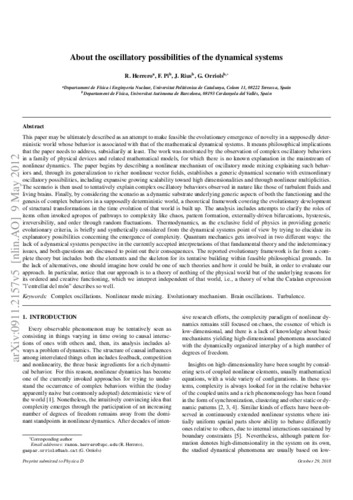 Pi Vila, Francesc
Rius, J
Orriols Tubella, Gaspar
Document typeExternal research report
Rights accessOpen Access
Abstract
This paper may be ultimately described as an attempt to make feasible the evolutionary emergence of novelty in a supposedly deterministic world whose behavior is associated with that of the mathematical dynamical systems. It means philosophical implications that the paper needs to address, subsidiarily at least. The work was motivated by the observation of complex oscillatory behaviors in a family of physical devices and related mathematical models, for which there is no known explanation in the mainstream of nonlinear dynamics. The paper begins by describing a nonlinear mechanism of oscillatory mode mixing explaining such behaviors and, through its generalization to richer nonlinear vector fields, establishes a generic dynamical scenario with extraordinary oscillatory possibilities, including expansive growing scalability toward high dimensionalities and through nonlinear multiplicities. The scenario is then used to tentatively explain complex oscillatory behaviors observed in nature like those of turbulent fluids and living brains. Finally, by considering the scenario as a dynamic substrate underlying generic aspects of both the functioning and the genesis of complex behaviors in a supposedly deterministic world, a theoretical framework covering the evolutionary development of structural transformations in the time evolution of that world is built up. The analysis includes attempts to clarify the roles of items often invoked apropos of pathways to complexity like chaos, pattern formation, externally-driven bifurcations, hysteresis, irreversibility, and order through random fluctuations. Thermodynamics, as the exclusive field of physics in providing generic evolutionary criteria, is briefly and synthetically considered from the dynamical systems point of view by trying to elucidate its explanatory possibilities concerning the emergence of complexity. Quantum mechanics gets involved in two different ways: the lack of a dynamical systems perspective in the currently accepted interpretations of that fundamental theory and the indeterminacy issues, and both questions are discussed to point out their consequences. The reported evolutionary framework is far from a complete theory but includes both the elements and the skeleton for its tentative building within feasible philosophical grounds. In the lack of alternatives, one should imagine how could be one of such theories and how it could be built, in order to evaluate our approach. In particular, notice that our approach is to a theory of nothing of the physical world but of the underlying reasons for its ordered and creative functioning, which we interpret independent of that world, i.e., a theory of what the Catalan expression ”l’entrellat del mon” describes so well.
CitationHerrero, R. [et al.]. About the oscillatory possibilities of the dynamical systems. 2009.
URIhttp://hdl.handle.net/2117/346094
URL other repositoryhttps://arxiv.org/abs/0911.2157
Collections
Share: