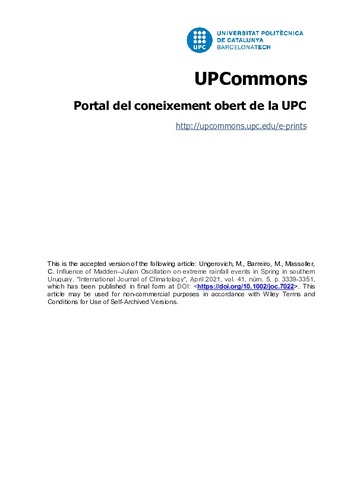 Document typeArticle
Rights accessOpen Access
ProjectSISTEMAS DINAMICOS COMPLEJOS Y HERRAMIENTAS AVANZADAS DE ANALISIS DE DATOS (AEI-PGC2018-099443-B-I00)
Abstract
The influence of Madden–Julian Oscillation (MJO) on the dynamics ofextreme rainfall events during austral Spring in Uruguay is investigated. Theresearch is focused on the southern region of the country, which includes15 weather stations. Extreme events are defined as days in which accumulatedrainfall exceeds the 90 percentile of rainy days, and MJO is classified accordingto the Real-time Multivariate MJO series 1 (RMM1) and 2 (RMM2) indices.Given that the extratropical teleconnections associated with MJO take at least1 week to set up, we explore the influence of MJO up to 11 days prior toextreme events. A nonlinear time series analysis is performed (using symbolicpatterns known as ordinal patterns) in order to consider the effects of the per-sistence of particular phases of MJO on the dynamic of extreme rainfall events.We find that MJO has the highest influence on extreme rainfall events in theregion when it shows a persistence in phases 4 and 5 for more than 5 days,which intensifies the polar jet, influencing the trajectories of the transientwaves that propagate in high latitudes, favouring geopotential disturbancesover Uruguay. In other cases, the atmospheric pattern that leads to extremerainfall events is characterized by a blocking episode that prevents transientactivity from high latitudes to reach Uruguay, and the disturbances associatedwith the extreme events propagate along the subtropics.
Location
1: Departament de Florida, Uruguai
CitationUngerovich, M.; Barreiro Parrillo, M.; Masoller, C. Influence of Madden–Julian Oscillation on extreme rainfall events in Spring in southern Uruguay. "International Journal of Climatology", 1 Abril 2021, vol. 41, núm. 5, p. 3339-3351.
URIhttp://hdl.handle.net/2117/345964
DOI10.1002/joc.7022
ISSN1097-0088
Publisher versionhttps://rmets.onlinelibrary.wiley.com/doi/abs/10.1002/joc.7022?af=R
Collections
Share: