Densification: A route towards enhanced thermal conductivity of epoxy composites 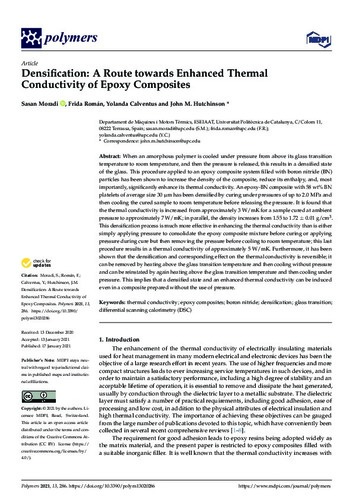 Document typeArticle
PublisherMultidisciplinary Digital Publishing Institute (MDPI)
Rights accessOpen Access
ProjectMATERIALES TERMOESTABLES AVANZADOS OBTENIDOS MEDIANTE METODOLOGIA CLICK (AEI-MAT2017-82849-C2-2-R)
Abstract
When an amorphous polymer is cooled under pressure from above its glass transition temperature to room temperature, and then the pressure is released, this results in a densified state of the glass. This procedure applied to an epoxy composite system filled with boron nitride (BN) particles has been shown to increase the density of the composite, reduce its enthalpy, and, most importantly, significantly enhance its thermal conductivity. An epoxy-BN composite with 58 wt% BN platelets of average size 30 µm has been densified by curing under pressures of up to 2.0 MPa and then cooling the cured sample to room temperature before releasing the pressure. It is found that the thermal conductivity is increased from approximately 3 W/mK for a sample cured at ambient pressure to approximately 7 W/mK; in parallel, the density increases from 1.55 to 1.72 ± 0.01 g/cm3. This densification process is much more effective in enhancing the thermal conductivity than is either simply applying pressure to consolidate the epoxy composite mixture before curing or applying pressure during cure but then removing the pressure before cooling to room temperature; this last procedure results in a thermal conductivity of approximately 5 W/mK. Furthermore, it has been shown that the densification and corresponding effect on the thermal conductivity is reversible; it can be removed by heating above the glass transition temperature and then cooling without pressure and can be reinstated by again heating above the glass transition temperature and then cooling under pressure. This implies that a densified state and an enhanced thermal conductivity can be induced even in a composite prepared without the use of pressure.
CitationMoradi, S. [et al.]. Densification: A route towards enhanced thermal conductivity of epoxy composites. "Polymers", 2021, vol. 13, núm. 2, p. 286/1-286/12.
URIhttp://hdl.handle.net/2117/345880
DOI10.3390/polym13020286
ISSN2073-4360
Publisher versionhttps://www.mdpi.com/2073-4360/13/2/286
Collections
Share: