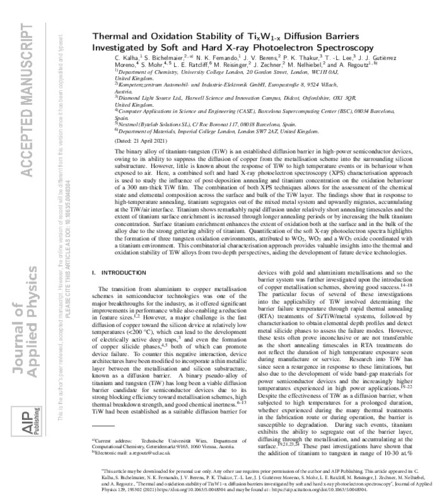 Document typeArticle
PublisherAmerican Institute of Physics
Rights accessOpen Access
Abstract
The binary alloy of titanium-tungsten (TiW) is an established diffusion barrier in high-power semiconductor devices, owing to its ability to suppress the diffusion of copper from the metallization scheme into the surrounding silicon substructure. However, little is known about the response of TiW to high-temperature events or its behavior when exposed to air. Here, a combined soft and hard x-ray photoelectron spectroscopy (XPS) characterization approach is used to study the influence of post-deposition annealing and titanium concentration on the oxidation behavior of a 300 nm-thick TiW film. The combination of both XPS techniques allows for the assessment of the chemical state and elemental composition across the surface and bulk of the TiW layer. The findings show that in response to high-temperature annealing, titanium segregates out of the mixed metal system and upwardly migrates, accumulating at the TiW/air interface. Titanium shows remarkably rapid diffusion under relatively short annealing timescales, and the extent of titanium surface enrichment is increased through longer annealing periods or by increasing the bulk titanium concentration. Surface titanium enrichment enhances the extent of oxidation both at the surface and in the bulk of the alloy due to the strong gettering ability of titanium. Quantification of the soft x-ray photoelectron spectra highlights the formation of three tungsten oxidation environments, attributed to WO2, WO3, and a WO3 oxide coordinated with a titanium environment. This combinatorial characterization approach provides valuable insights into the thermal and oxidation stability of TiW alloys from two depth perspectives, aiding the development of future device technologies.
Related documenthttps://aip.scitation.org/doi/suppl/10.1063/5.0048304
Dataset  https://nomad-lab.eu/prod/rae/gui/dataset/id/n7Q2rvmFTUKaOw9B_KwD3Q
CitationKalha, C. [et al.]. Thermal and oxidation stability of TixW1−x diffusion barriers investigated by soft and hard x-ray photoelectron spectroscopy. "Journal of Applied Physics", 2021, vol. 129, núm. 19, 195302.
URIhttp://hdl.handle.net/2117/345840
DOI10.1063/5.0048304
ISSN0021-8979
1089-7550
Publisher versionhttps://aip.scitation.org/doi/10.1063/5.0048304
Collections
Share: