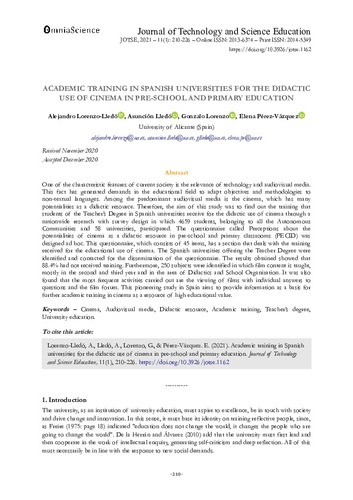 Except where otherwise noted, content on this work is licensed under a Creative Commons license : Attribution-NonCommercial 4.0 International
Abstract
One of the characteristic features of current society is the relevance of technology and audiovisual media.This fact has generated demands in the educational field to adapt objectives and methodologies tonon-textual languages. Among the predominant audiovisual media is the cinema, which has manypotentialities as a didactic resource. Therefore, the aim of this study was to find out the training thatstudents of the Teacher’s Degree in Spanish universities receive for the didactic use of cinema through anationwide research with survey design in which 4659 students, belonging to all the AutonomousCommunities and 58 universities, participated. The questionnaire called Perceptions about thepotentialities of cinema as a didactic resource in pre-school and primary classrooms (PECID) wasdesigned ad hoc. This questionnaire, which consists of 45 items, has a section that deals with the trainingreceived for the educational use of cinema. The Spanish universities offering the Teacher Degree wereidentified and contacted for the dissemination of the questionnaire. The results obtained showed that88.4% had not received training. Furthermore, 250 subjects were identified in which film content is taught,mostly in the second and third year and in the area of Didactics and School Organization. It was alsofound that the most frequent activities carried out are the viewing of films with individual answers toquestions and the film forum. This pioneering study in Spain aims to provide information as a basis forfurther academic training in cinema as a resource of high educational value
CitationLorenzo-Lledó, A. [et al.]. Academic training in spanish universities for the didactic use of cinema in pre-school and primary education. "JOTSE: Journal of Technology and Science Education", Abril 2021, vol. 11, núm. 1, p. 210-226.
URIhttp://hdl.handle.net/2117/345613
DOI10.3926/jotse.1162
DLB-2000-2012
ISSN2013-6374
Collections
Share: