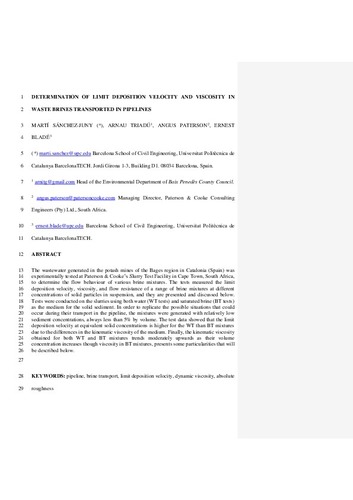 Document typeArticle
PublisherAmerican Society of Civil Engineers
Rights accessOpen Access
Abstract
The wastewater generated in the potash mines of the Bages region in Catalonia (Spain) was experimentally tested at the Paterson & Cooke slurry test facility in Cape Town, South Africa, to determine the flow behavior and limit deposition velocity of various brine and brine-slurry mixtures containing a low solids concentration of fine insoluble particles. The tests measured the limit deposition velocity, viscosity, and flow resistance of a range of brine mixtures at different concentrations of solid particles in suspension, and they are presented and discussed in this paper. Tests were conducted on the slurries using both water tests (WT) and saturated brine tests (BT) as the medium for the solid sediment. In order to replicate the possible situations that could occur during their transport in the pipeline, the mixtures were generated with relatively low sediment concentrations, always less than 5% by volume. The test data showed that the limit deposition velocity at equivalent solid concentrations is higher for the WT mixtures than for the BT mixtures due to the differences in the kinematic viscosity of the medium. Finally, the kinematic viscosity obtained for both WT and BT mixtures trends moderately upward as their volume concentration increases, although the viscosity in BT mixtures presents some particularities that are subsequently described.
Description
This material may be downloaded for personal use only. Any other use requires prior permission of the American Society of Civil Engineers. This material may be found at https://ascelibrary.org/doi/full/10.1061/%28ASCE%29PS.1949-1204.0000560.
CitationSanchez-Juny, M. [et al.]. Determination of limit deposition velocity and viscosity in waste brines transported in pipelines. "Journal of pipeline systems engineering and practice", Agost 2021, vol. 12, núm. 3, p. 04021023:1-04021023:13.
URIhttp://hdl.handle.net/2117/345606
DOI10.1061/(ASCE)PS.1949-1204.0000560
ISSN1949-1190
Publisher versionhttps://ascelibrary.org/doi/abs/10.1061/%28ASCE%29PS.1949-1204.0000560
Collections
Share: