Analysis of academic performance based on sociograms: a case study with students from at-risk groups 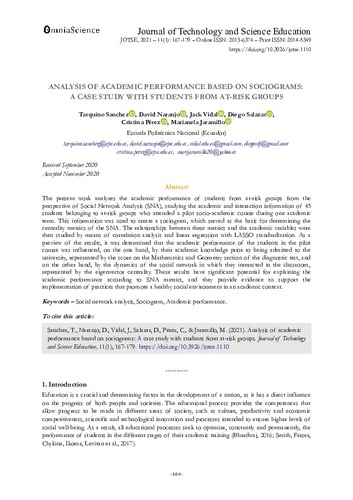 Except where otherwise noted, content on this work is licensed under a Creative Commons license : Attribution-NonCommercial 4.0 International
Abstract
The present work analyzes the academic performance of students from at-risk groups from theperspective of Social Network Analysis (SNA), studying the academic and interaction information of 45students belonging to at-risk groups who attended a pilot socio-academic course during one academicterm. This information was used to create a sociogram, which served as the basis for determining thecentrality metrics of the SNA. The relationships between these metrics and the academic variables werethen studied by means of correlation analysis and linear regression with LASSO standardization. As apreview of the results, it was determined that the academic performance of the students in the pilotcourse was influenced, on the one hand, by their academic knowledge prior to being admitted to theuniversity, represented by the score on the Mathematics and Geometry section of the diagnostic test, andon the other hand, by the dynamics of the social network in which they interacted in the classroom,represented by the eigenvector centrality. These results have significant potential for explaining theacademic performance according to SNA metrics, and they provide evidence to support theimplementation of practices that promote a healthy social environment in an academic context
CitationSanchez, T. [et al.]. Analysis of academic performance based on sociograms: a case study with students from at-risk groups. "JOTSE: Journal of Technology and Science Education", Abril 2021, vol. 11, núm. 1, p. 167-179.
URIhttp://hdl.handle.net/2117/345604
DOI10.3926/jotse.1110
DLB-2000-2012
ISSN2013-6374
Collections
Share: