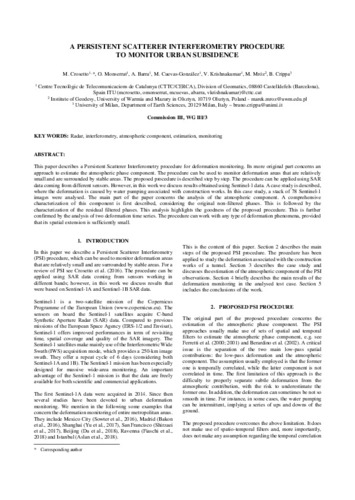 Mróz, Marek
Crippa, Bruno
Document typeConference report
Rights accessOpen Access
Abstract
This paper describes a Persistent Scatterer Interferometry procedure for deformation monitoring. Its more original part concerns an approach to estimate the atmospheric phase component. The procedure can be used to monitor deformation areas that are relatively small and are surrounded by stable areas. The proposed procedure is described step by step. The procedure can be applied using SAR data coming from different sensors. However, in this work we discuss results obtained using Sentinel-1 data. A case study is described, where the deformation is caused by water pumping associated with construction works. In this case study, a stack of 78 Sentinel-1 images were analysed. The main part of the paper concerns the analysis of the atmospheric component. A comprehensive characterization of this component is first described, considering the original non-filtered phases. This is followed by the characterization of the residual filtered phases. This analysis highlights the goodness of the proposed procedure. This is further confirmed by the analysis of two deformation time series. The procedure can work with any type of deformation phenomena, provided that its spatial extension is sufficiently small.
CitationCrosetto, M. [et al.]. A persistent scatterer interferometry procedure to monitor urban subsidence. A: International Workshop on Advances in SAR: Constellations, Signal processing, and Applications (SarCon). "International Workshop on Advances in SAR: Constellations, Signal processing, and Applications (SarCon),Nice, France, 14 June 2019". 2019, p. 1-6.
URIhttp://hdl.handle.net/2117/345486
Publisher versionhttps://www.int-arch-photogramm-remote-sens-spatial-inf-sci.net/XLII-2-W13/1/2019/
Collections
Share: