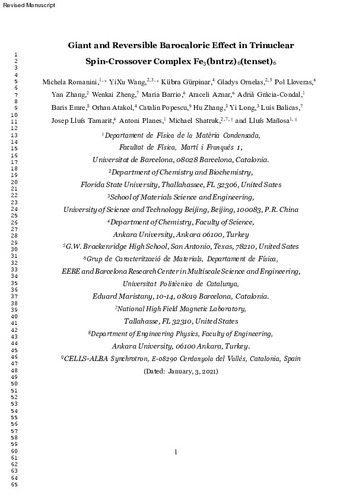 Except where otherwise noted, content on this work is licensed under a Creative Commons license : Attribution-NonCommercial-NoDerivs 3.0 Spain
Abstract
A giant barocaloric effect (BCE) in a molecular material Fe3(bntrz)6(tcnset)6 (FBT) is reported, where bntrz = 4-(benzyl)-1,2,4-triazole and tcnset = 1,1,3,3-tetracyano-2-thioethylepropenide. The crystal structure of FBT contains a trinuclear transition metal complex that undergoes an abrupt spin-state switching between the state in which all three FeII centers are in the high-spin (S = 2) electronic configuration and the state in which all of them are in the low-spin (S = 0) configuration. Despite the strongly cooperative nature of the spin transition, it proceeds with a negligible hysteresis and a large volumetric change, suggesting that FBT should be a good candidate for producing a large BCE. Powder X-ray diffraction and calorimetry reveal that the material is highly susceptible to applied pressure, as the transition temperature spans the range from 318 at ambient pressure to 383 K at 2.6 kbar. Despite the large shift in the spin-transition temperature, its nonhysteretic character is maintained under applied pressure. Such behavior leads to a remarkably large and reversible BCE, characterized by an isothermal entropy change of 120 J kg-1 K-1 and an adiabatic temperature change of 35 K, which are among the highest reversible values reported for any caloric material thus far.
CitationRomanini, M. [et al.]. Giant and reversible barocaloric effect in trinuclear spin-crossover complex Fe3(bntrz)6(tcnset)6. "Advanced materials", Març 2021, vol. 33, núm. 10, p. 2008076:1-2008076:9.
URIhttp://hdl.handle.net/2117/345456
DOI10.1002/adma.202008076
ISSN0935-9648
Publisher versionhttps://doi.org/10.1002/adma.202008076
Collections
Share: