Monocular visual SLAM based on a cooperative UAV–target system 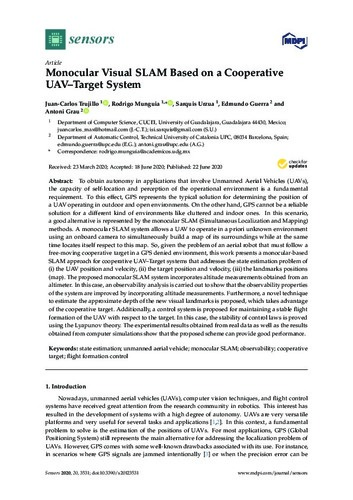 Except where otherwise noted, content on this work is licensed under a Creative Commons license : Attribution-NonCommercial-NoDerivs 3.0 Spain
Abstract
To obtain autonomy in applications that involve Unmanned Aerial Vehicles (UAVs), the capacity of self-location and perception of the operational environment is a fundamental requirement. To this effect, GPS represents the typical solution for determining the position of a UAV operating in outdoor and open environments. On the other hand, GPS cannot be a reliable solution for a different kind of environments like cluttered and indoor ones. In this scenario, a good alternative is represented by the monocular SLAM (Simultaneous Localization and Mapping) methods. A monocular SLAM system allows a UAV to operate in a priori unknown environment using an onboard camera to simultaneously build a map of its surroundings while at the same time locates itself respect to this map. So, given the problem of an aerial robot that must follow a free-moving cooperative target in a GPS denied environment, this work presents a monocular-based SLAM approach for cooperative UAV–Target systems that addresses the state estimation problem of (i) the UAV position and velocity, (ii) the target position and velocity, (iii) the landmarks positions (map). The proposed monocular SLAM system incorporates altitude measurements obtained from an altimeter. In this case, an observability analysis is carried out to show that the observability properties of the system are improved by incorporating altitude measurements. Furthermore, a novel technique to estimate the approximate depth of the new visual landmarks is proposed, which takes advantage of the cooperative target. Additionally, a control system is proposed for maintaining a stable flight formation of the UAV with respect to the target. In this case, the stability of control laws is proved using the Lyapunov theory. The experimental results obtained from real data as well as the results obtained from computer simulations show that the proposed scheme can provide good performance.
CitationTrujillo, J.-C. [et al.]. Monocular visual SLAM based on a cooperative UAV–target system. "Sensors", 22 Juny 2020, vol. 20, núm. 12, p. 3531:1-3531: 32.
URIhttp://hdl.handle.net/2117/345445
DOI10.3390/s20123531
ISSN1424-8220
Publisher versionhttps://www.mdpi.com/1424-8220/20/12/3531
Collections
Share: