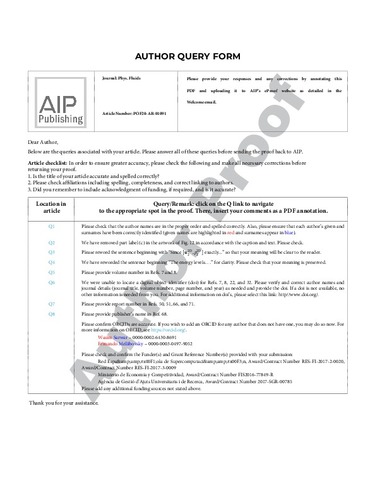 Document typeArticle
Rights accessOpen Access
Abstract
The flow past a circular cylinder in the transitional regime at Re = 2000 has been thoroughly investigated via well resolved direct numerical simulation with a spectral element code. Spanwise periodic boundary conditions of at least Lz = 2.5D are required to properly reproduce first and second order turbulent statistics in the cylinder wake. A Kelvin–Helmholtz instability can already be detected at this relatively low Reynolds number at the flapping shear layers issued from either side of the cylinder. The instability, with a frequency fKH ¿ 0.84 that is in excellent agreement with published experimental results, arises only occasionally and the associated spanwise vortices are subject to spanwise localization. We show that while Kármán vortices remain predominantly two-dimensional, streamwise vortical structures appearing along the braids connecting consecutive vortices are mainly responsible for rendering the flow three-dimensional. These structures may appear in isolation or in vortex pairs and have a typical spanwise wavelength of around ¿z ¿ 0.20–0.28 at a location at (x, y) = (3, 0.5), as measured via Hilbert transform along probe arrays with spanwise orientation. In line with experimental and numerical results at higher Re = 3900, the size of the structures drops in the very near-wake to a minimum at x ¿ 2.5 and then steadily grows to asymptotically attain a finite maximum for x ¿ 20. A time-evolution-based stability analysis of the underlying two-dimensional vortex shedding flow, which happens to be chaotic, shows that the fastest growing perturbations in the linear regime have a spanwise periodicity ¿z ¿ 0.3 and are located in the very near-wake, right within the braid that connects the last forming Kármán vortex with the previous one, thus hinting at a close relation with the fully developed vortical structures observed in full-fledged three-dimensional computations.
CitationSarwar, W.; Mellibovsky, F. Characterization of three-dimensional vortical structures in the wake past a circular cylinder in the transitional regime. "Physics of fluids", 2020, vol. 32, núm. 74104, p. 1-21.
URIhttp://hdl.handle.net/2117/345435
DOI10.1063/5.0011311
ISSN1070-6631
Publisher versionhttps://aip.scitation.org/doi/10.1063/5.0011311
Collections
Share: