Static analysis to enhance programmability and performance in OmpSs-2 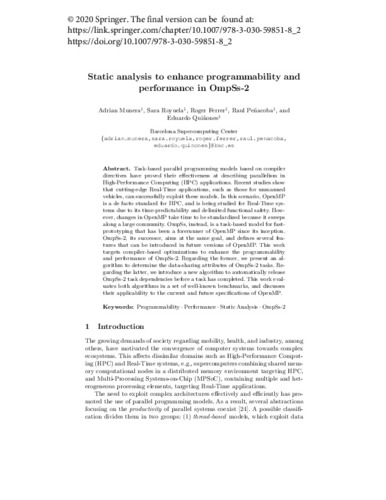 Ferrer, Roger
Peñacoba, Raul
Quiñones, Eduardo
Document typeConference report
PublisherSpringer, Cham
Rights accessOpen Access
Abstract
Task-based parallel programming models based on compiler directives have proved their effectiveness at describing parallelism in High-Performance Computing (HPC) applications. Recent studies show that cutting-edge Real-Time applications, such as those for unmanned vehicles, can successfully exploit these models. In this scenario, OpenMP is a de facto standard for HPC, and is being studied for Real-Time systems due to its time-predictability and delimited functional safety. However, changes in OpenMP take time to be standardized because it sweeps along a large community. OmpSs, instead, is a task-based model for fast-prototyping that has been a forerunner of OpenMP since its inception. OmpSs-2, its successor, aims at the same goal, and defines several features that can be introduced in future versions of OpenMP. This work targets compiler-based optimizations to enhance the programmability and performance of OmpSs-2. Regarding the former, we present an algorithm to determine the data-sharing attributes of OmpSs-2 tasks. Regarding the latter, we introduce a new algorithm to automatically release OmpSs-2 task dependencies before a task has completed. This work evaluates both algorithms in a set of well-known benchmarks, and discusses their applicability to the current and future specifications of OpenMP.
CitationMunera, A. [et al.]. Static analysis to enhance programmability and performance in OmpSs-2. A: International Conference on High Performance Computing. "ISC High Performance 2020 International Workshops, Frankfurt, Germany, June 21–25, 2020, Revised Selected Papers". Springer, Cham, 2020, p. 19-33. ISBN 978-3-030-59850-1. DOI 10.1007/978-3-030-59851-8_2.
URIhttp://hdl.handle.net/2117/345417
DOI10.1007/978-3-030-59851-8_2
ISBN978-3-030-59850-1
ISSN0302-9743
Publisher versionhttps://link.springer.com/chapter/10.1007/978-3-030-59851-8_2
Collections
Share: