El Niño teleconnection to the Euro-Mediterranean late-winter: the role of extratropical Pacific modulation 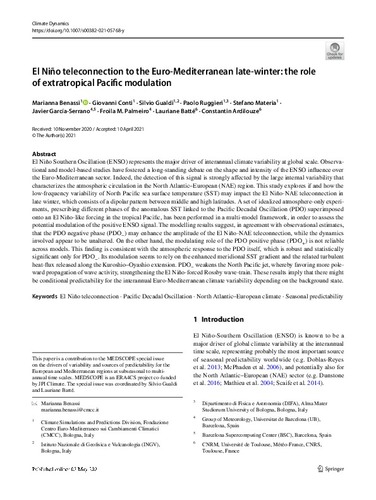 Palmeiro, Froila M.
Batté, Lauriane
Ardilouze, Constantin
Document typeArticle
PublisherSpringer
Rights accessOpen Access
European Commission's projectERA4CS - European Research Area for Climate Services (EC-H2020-690462)
Abstract
El Niño Southern Oscillation (ENSO) represents the major driver of interannual climate variability at global scale. Observational and model-based studies have fostered a long-standing debate on the shape and intensity of the ENSO influence over the Euro-Mediterranean sector. Indeed, the detection of this signal is strongly affected by the large internal variability that characterizes the atmospheric circulation in the North Atlantic–European (NAE) region. This study explores if and how the low-frequency variability of North Pacific sea surface temperature (SST) may impact the El Niño-NAE teleconnection in late winter, which consists of a dipolar pattern between middle and high latitudes. A set of idealized atmosphere-only experiments, prescribing different phases of the anomalous SST linked to the Pacific Decadal Oscillation (PDO) superimposed onto an El Niño-like forcing in the tropical Pacific, has been performed in a multi-model framework, in order to assess the potential modulation of the positive ENSO signal. The modelling results suggest, in agreement with observational estimates, that the PDO negative phase (PDO−) may enhance the amplitude of the El Niño-NAE teleconnection, while the dynamics involved appear to be unaltered. On the other hand, the modulating role of the PDO positive phase (PDO+) is not reliable across models. This finding is consistent with the atmospheric response to the PDO itself, which is robust and statistically significant only for PDO−. Its modulation seems to rely on the enhanced meridional SST gradient and the related turbulent heat-flux released along the Kuroshio–Oyashio extension. PDO− weakens the North Pacific jet, whereby favoring more poleward propagation of wave activity, strengthening the El Niño-forced Rossby wave-train. These results imply that there might be conditional predictability for the interannual Euro-Mediterranean climate variability depending on the background state.
CitationBenassi, M. [et al.]. El Niño teleconnection to the Euro-Mediterranean late-winter: the role of extratropical Pacific modulation. "Climate Dynamics", 2021,
URIhttp://hdl.handle.net/2117/345367
DOI10.1007/s00382-021-05768-y
ISSN1432-0894
Publisher versionhttps://link.springer.com/article/10.1007/s00382-021-05768-y
Collections
Share: