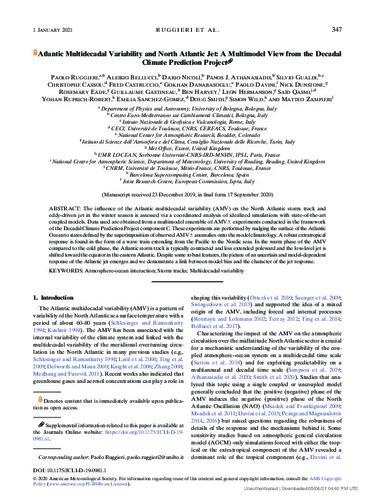 Document typeArticle
PublisherAmerican Meteorological Society
Rights accessOpen Access
All rights reserved. This work is protected by the corresponding intellectual and industrial property rights. Without prejudice to any existing legal exemptions, reproduction, distribution, public communication or transformation of this work are prohibited without permission of the copyright holder
ProjectINADEC - Impacts of the North Atlantic Decadal variability on European Climate: mechanisms and predictability (EC-H2020-800154)
STARS - SupercompuTing And Related applicationS Fellows Program (EC-H2020-754433)
Abstract
The influence of the Atlantic multidecadal variability (AMV) on the North Atlantic storm track and eddy-driven jet in the winter season is assessed via a coordinated analysis of idealized simulations with state-of-the-art coupled models. Data used are obtained from a multimodel ensemble of AMV± experiments conducted in the framework of the Decadal Climate Prediction Project component C. These experiments are performed by nudging the surface of the Atlantic Ocean to states defined by the superimposition of observed AMV± anomalies onto the model climatology. A robust extratropical response is found in the form of a wave train extending from the Pacific to the Nordic seas. In the warm phase of the AMV compared to the cold phase, the Atlantic storm track is typically contracted and less extended poleward and the low-level jet is shifted toward the equator in the eastern Atlantic. Despite some robust features, the picture of an uncertain and model-dependent response of the Atlantic jet emerges and we demonstrate a link between model bias and the character of the jet response.
CitationRuggieri, P. [et al.]. Atlantic multidecadal variability and North Atlantic jet: a multimodel view from the Decadal Climate rediction Project. "Journal of Climate", 2021, vol. 34, núm. 1, p. 347-360.
URIhttp://hdl.handle.net/2117/345267
DOI10.1175/JCLI-D-19-0981.1
ISSN1520-0442
Publisher versionhttps://journals.ametsoc.org/view/journals/clim/34/1/JCLI-D-19-0981.1.xml
Collections
Share: