Labrador Sea subsurface density as a precursor of multidecadal variability in the North Atlantic: a multi-model study 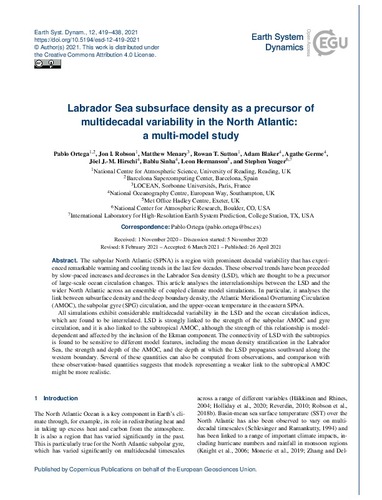 Robson, Jon I.
Menary, Matthew
Sutton, Rowan T.
Blaker, Adam
Germe, Agathe
Hirschi, Jöel J.-M.
Sinha, Bablu
Hermanson, Leon
Yeager, Stephen
Document typeArticle
PublisherCopernicus Publications
Rights accessOpen Access
Abstract
The subpolar North Atlantic (SPNA) is a region with prominent decadal variability that has experienced remarkable warming and cooling trends in the last few decades. These observed trends have been preceded by slow-paced increases and decreases in the Labrador Sea density (LSD), which are thought to be a precursor of large-scale ocean circulation changes. This article analyses the interrelationships between the LSD and the wider North Atlantic across an ensemble of coupled climate model simulations. In particular, it analyses the link between subsurface density and the deep boundary density, the Atlantic Meridional Overturning Circulation (AMOC), the subpolar gyre (SPG) circulation, and the upper-ocean temperature in the eastern SPNA. All simulations exhibit considerable multidecadal variability in the LSD and the ocean circulation indices, which are found to be interrelated. LSD is strongly linked to the strength of the subpolar AMOC and gyre circulation, and it is also linked to the subtropical AMOC, although the strength of this relationship is model-dependent and affected by the inclusion of the Ekman component. The connectivity of LSD with the subtropics is found to be sensitive to different model features, including the mean density stratification in the Labrador Sea, the strength and depth of the AMOC, and the depth at which the LSD propagates southward along the western boundary. Several of these quantities can also be computed from observations, and comparison with these observation-based quantities suggests that models representing a weaker link to the subtropical AMOC might be more realistic.
Related documenthttps://esd.copernicus.org/articles/12/419/2021/esd-12-419-2021-supplement.pdf
CitationOrtega Montilla, P. [et al.]. Labrador Sea subsurface density as a precursor of multidecadal variability in the North Atlantic: a multi-model study. "Earth System Dynamics", 2021, vol. 12, núm. 2, p. 419-438.
URIhttp://hdl.handle.net/2117/345149
DOI10.5194/esd-12-419-2021, 2021.
ISSN2190-4987
Publisher versionhttps://esd.copernicus.org/articles/12/419/2021/
Collections
Share: