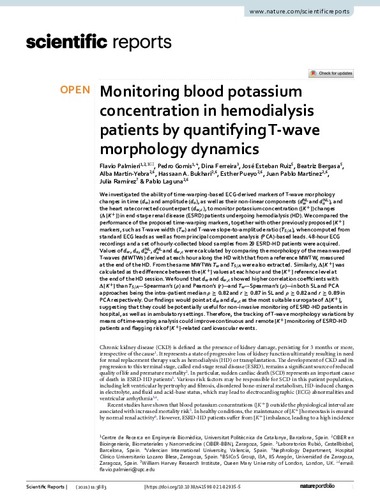 Ferreira, Dina
Ruiz, José Esteban
Bergasa, Beatriz
Martín-Yebra, Alba
Bukhari, H.A.
Pueyo Paules, Esther
Mártinez, Juan Pablo
Ramírez, Julia
Laguna, Pablo
Document typeArticle
PublisherNature
Rights accessOpen Access
Abstract
We investigated the ability of time-warping-based ECG-derived markers of T-wave morphology changes in time (dw) and amplitude (da), as well as their non-linear components (dNLw and dNLa), and the heart rate corrected counterpart (dw,c), to monitor potassium concentration ([K+]) changes (¿[K+]) in end-stage renal disease (ESRD) patients undergoing hemodialysis (HD). We compared the performance of the proposed time-warping markers, together with other previously proposed [K+] markers, such as T-wave width (Tw) and T-wave slope-to-amplitude ratio (TS/A), when computed from standard ECG leads as well as from principal component analysis (PCA)-based leads. 48-hour ECG recordings and a set of hourly-collected blood samples from 29 ESRD-HD patients were acquired. Values of dw, da, dNLw, dNLa and dw,c were calculated by comparing the morphology of the mean warped T-waves (MWTWs) derived at each hour along the HD with that from a reference MWTW, measured at the end of the HD. From the same MWTWs Tw and TS/A were also extracted. Similarly, ¿[K+] was calculated as the difference between the [K+] values at each hour and the [K+] reference level at the end of the HD session. We found that dw and dw,c showed higher correlation coefficients with ¿[K+] than TS/A—Spearman’s (¿) and Pearson’s (r)—and Tw—Spearman’s (¿)—in both SL and PCA approaches being the intra-patient median ¿=0.82 and r=0.87 in SL and ¿=0.82 and r=0.89 in PCA respectively. Our findings would point at dw and dw,c as the most suitable surrogate of ¿[K+], suggesting that they could be potentially useful for non-invasive monitoring of ESRD-HD patients in hospital, as well as in ambulatory settings. Therefore, the tracking of T-wave morphology variations by means of time-warping analysis could improve continuous and remote [K+] monitoring of ESRD-HD patients and flagging risk of [K+]-related cardiovascular events
CitationPalmieri, F. [et al.]. Monitoring blood potassium concentration in hemodialysis patients by quantifying T-wave morphology dynamics. "Scientific reports", 16 Febrer 2021, vol. 11, núm. 1.
URIhttp://hdl.handle.net/2117/344958
DOI10.1038/s41598-021-82935-5
ISSN2045-2322
Publisher versionhttps://www.nature.com/articles/s41598-021-82935-5
Collections
Share: