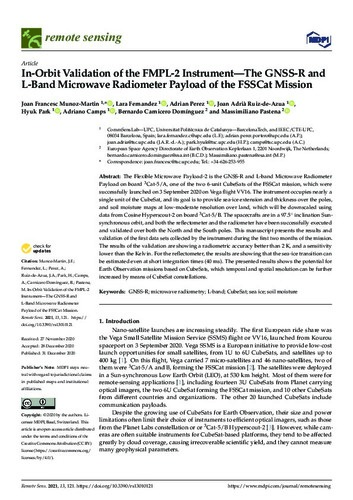 Carnicero Domínguez, Bernardo
Pastena, Massimiliano
Document typeArticle
PublisherMultidisciplinary Digital Publishing Institute (MDPI)
Rights accessOpen Access
Abstract
The Flexible Microwave Payload-2 is the GNSS-R and L-band Microwave Radiometer Payload on board 3Cat-5/A, one of the two 6-unit CubeSats of the FSSCat mission, which were successfully launched on 3 September 2020 on Vega flight VV16. The instrument occupies nearly a single unit of the CubeSat, and its goal is to provide sea-ice extension and thickness over the poles, and soil moisture maps at low-moderate resolution over land, which will be downscaled using data from Cosine Hyperscout-2 on board 3Cat-5/B. The spacecrafts are in a 97.5° inclination Sun-synchronous orbit, and both the reflectometer and the radiometer have been successfully executed and validated over both the North and the South poles. This manuscript presents the results and validation of the first data sets collected by the instrument during the first two months of the mission. The results of the validation are showing a radiometric accuracy better than 2 K, and a sensitivity lower than the Kelvin. For the reflectometer, the results are showing that the sea-ice transition can be estimated even at short integration times (40 ms). The presented results shows the potential for Earth Observation missions based on CubeSats, which temporal and spatial resolution can be further increased by means of CubeSat constellations
CitationMuñoz, J. [et al.]. In-orbit validation of the fmpl-2 instrument—the gnss-r and l-band microwave radiometer payload of the fsscat mission. "Remote sensing", 1 Gener 2021, vol. 13, núm. 121, p. 1-19.
URIhttp://hdl.handle.net/2117/344841
DOI10.3390/rs13010121
ISSN2072-4292
Publisher versionhttps://www.mdpi.com/2072-4292/13/1/121
Collections
Share: