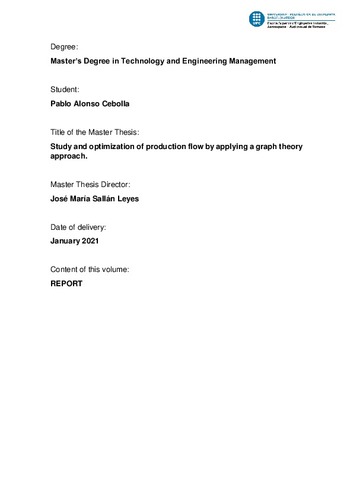 Document typeMaster thesis
Rights accessOpen Access
Abstract
The main objective of this thesis is to develop and perform an analysis of optimization based on applying a Graph Theory approach on manufacturing systems, throughout which fundamental information about the structure and connectivity behaviour of the studied networks will be obtained, allowing to determine the most efficient ways of improving the security and the quality of the production flow. As a guidance for the study, the following two hypotheses are presented at the introduction of the project: the first and more general one, The application of a Graph Theory approach to analyse and study manufacturing systems offers suitable information that can be used to optimize the production flow; the second and more specific one, A Local Clustering Coefficient (LCC) approach can be used to cluster processes of a manufacturing system. To prove the veracity of both hypotheses and pursuit the main objective of the study, several procedures based on parameters and theoretical aspects of the Graph Theory are applied to different manufacturing system’s equivalent graphs. Concretely, the suitability of this approach is tested in three different manufacturing systems: in first instance, two toy model networks are used to observe the response and the coherence of some of the proposed analysis procedures in front of relatively simple and not large manufacturing systems; in second and final instance, some of the procedures implemented and polished in toy model’s chapter are tested in front of a far more large and complex manufacturing system’s equivalent network. The methods of which the Graph Theory approach mainly consist of are based on the analysis of centrality measures from different perspectives such as its evolution throughout the network, synergies and robustness analysis mainly based on sequential targetted centrality attacks. The results obtained from the application of the Graph Theory approach on manufacturing systems are positive and promising, as the information gathered about the critical connectivity points and the behavioural structure of the studied networks have permitted, using a proper interpretation, to make suggestions and recommendations that can be implemented to optimize the production flow and to plan the most efficient way of investing economic resources. But in what the second hypothesis is concerned, the results obtained indicate that there is no coherence on using the Local Clustering Coefficient, as well as Strongly Connected Components and Weakly Connected Components, to determine if certain components of the manufacturing system can be clustered or not
SubjectsManufacturing processes, Graph theory, Production planning, Optimization, Fabricació, Grafs, Teoria de, Producció -- Planificació, Optimització
DegreeMÀSTER UNIVERSITARI EN GESTIÓ D'EMPRESES DE TECNOLOGIA I D'ENGINYERIA (Pla 2016)
URIhttp://hdl.handle.net/2117/344516
Collections
Share: