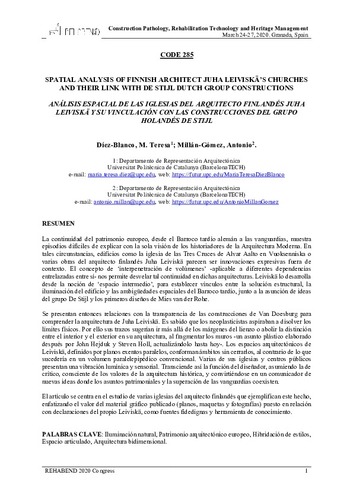 Except where otherwise noted, content on this work is licensed under a Creative Commons license : Attribution-NonCommercial-NoDerivs 3.0 Spain
Abstract
The continuity of European Heritage, from late German Baroque to the avant-garde, shows episodes which are difficult to explain with the sole vision of Modern Architecture historians. In these circumstances, buildings such as the church of the Three Crosses of Alvar Aalto in Vuoksenniska or several works of Finnish architect Juha Leiviskä seem to be expressive innovations out of context. The concept of 'interpenetration of volumes' -applicable to different intertwined spaces- allows us to reveal such continuity in these architectures. Leiviskä develops it from the notion of 'intermediate space', to establish links between the structural solution, the lighting of the building and Late Baroque spatial ambiguities, together with the assumption of ideas from the De Stijl group and the first designs by Mies van der Rohe. Relationships with the transparent constructions by Van Doesburg are then presented in order to understand Juha Leiviskä's architecture. It is known that the Neoplasticists aspired to dissolve the physical boundaries. That is why their painting lines suggested a thrust beyond the margins of the canvas or the abolition between the interior and the exterior in their architecture, by fragmenting walls -a plastic matter later elaborated by John Hejduk and Steven Holl, lasting until today-. Leiviskä's architectural spaces, defined by free parallel planes, form areas without closing them, contrary to what would happen in a conventional rectangular parallelepipedic volume. Several of his churches and public centres present a light and sensorial vibration. He transcended the designer’s role, assuming that of a critic, aware of the values of historical architecture, and becoming a communicator of new ideas where heritage issues and the overcoming of avant-garde coexist. The article focuses on the study of several churches of the Finnish architect that exemplify this fact, emphasizing the value of the published graphic material (plans, models and photographs) connected to statements by Leiviskä himself, as reliable sources and knowledge tool.
CitationDíez-Blanco, M.T.; Millan, A. Spatial analysis of Finnish architect Juha Leiviskä's churches and their link with the Stijl Dutch group. A: Euro-American Congress on Construction Pathology, Rehabilitation Technology and Heritage Management. "REHABEND 2020: construction pathology, rehabilitation technology and heritage management (8th REHABEND Congress), Granada (Spain), March 24th-27th, 2020". Santander: Universidad de Cantabria, 2020, p. 152-161. ISBN 9788409178735.
URIhttp://hdl.handle.net/2117/344399
ISBN9788409178735
Collections
Share: