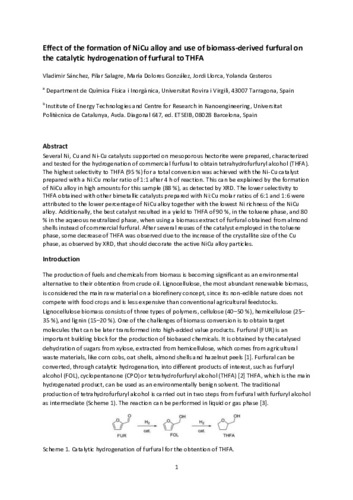 Except where otherwise noted, content on this work is licensed under a Creative Commons license : Attribution-NonCommercial-NoDerivs 3.0 Spain
Abstract
Several Ni, Cu and Ni-Cu catalysts supported on mesoporous hectorite were prepared, characterized and tested for the hydrogenation of commercial furfural to obtain tetrahydrofurfuryl alcohol (THFA). The highest selectivity to THFA (95 %) for a total conversion was achieved with the Ni-Cu catalyst prepared with a Ni:Cu molar ratio of 1:1 after 4¿h of reaction. This can be explained by the formation of NiCu alloy in high amounts for this sample (88 %), as detected by XRD. The lower selectivity to THFA obtained with other bimetallic catalysts prepared with Ni:Cu molar ratios of 6:1 and 1:6 were attributed to the lower percentage of NiCu alloy together with the lowest Ni richness of the NiCu alloy. Additionally, the best catalyst resulted in a yield to THFA of 90 %, in the toluene phase, and 80 % in the aqueous neutralized phase, when using a biomass extract of furfural obtained from almond shells instead of commercial furfural. After several reuses of the catalyst employed in the toluene phase, some decrease of THFA was observed due to the increase of the crystallite size of the Cu phase, as observed by XRD, that should decorate the active NiCu alloy particles.
CitationSánchez, V. [et al.]. Effect of the formation of NiCu alloy and use of biomass-derived furfural on the catalytic hydrogenation of furfural to THFA. "Molecular catalysis", 1 Juliol 2020, vol. 490, p. 110956:1-110956:10.
URIhttp://hdl.handle.net/2117/344100
DOI10.1016/j.mcat.2020.110956
ISSN2468-8231
Publisher versionhttps://www.sciencedirect.com/science/article/abs/pii/S2468823120302145
Collections
Share: