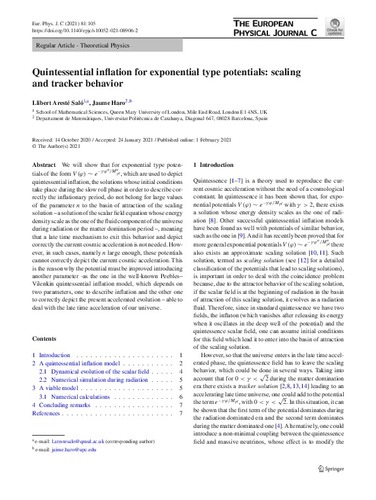 Document typeArticle
Publisherspringer-Verlag
Rights accessOpen Access
Abstract
We will show that for exponential type potentials of the form V(f)~e-¿fn/Mnpl, which are used to depict quintessential inflation, the solutions whose initial conditions take place during the slow roll phase in order to describe correctly the inflationary period, do not belong for large values of the parameter n to the basin of attraction of the scaling solution – a solution of the scalar field equation whose energy density scale as the one of the fluid component of the universe during radiation or the matter domination period –, meaning that a late time mechanism to exit this behavior and depict correctly the current cosmic acceleration is not needed. However, in such cases, namely n large enough, these potentials cannot correctly depict the current cosmic acceleration. This is the reason why the potential must be improved introducing another parameter -as the one in the well-known Peebles–Vilenkin quintessential inflation model, which depends on two parameters, one to describe inflation and the other one to correctly depict the present accelerated evolution – able to deal with the late time acceleration of our universe.
CitationAresté, L.; Haro, J. Quintessential inflation for exponential type potentials: scaling and tracker behavior. "European physical journal. C, Particles and fields (Internet)", Febrer 2021, vol. 81, núm. 2, p. 105-1-105-8.
URIhttp://hdl.handle.net/2117/344071
DOI10.1140/epjc/s10052-021-08906-2
ISSN1434-6052
Publisher versionhttps://link.springer.com/article/10.1140/epjc/s10052-021-08906-2
Collections
Share: