Laser surface texturing of PECM tools and the validation 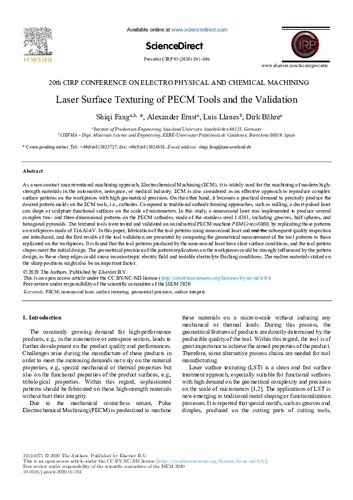 Document typeArticle
PublisherElsevier
Rights accessOpen Access
Abstract
As a non-contact unconventional machining approach, Electrochemical Machining (ECM), it is widely used for the machining of modern high-strength materials in the automotive, aerospace, or medical industry. ECM is also considered as an effective approach to reproduce complex surface patterns on the workpieces with high geometrical precision. On the other hand, it becomes a practical demand to precisely produce the desired pattern molds on the ECM tools, i.e., cathodes. Compared to traditional cathode forming approaches, such as milling, a short-pulsed laser can shape or sculpture functional surfaces on the scale of micrometers. In this study, a nanosecond laser was implemented to produce several complex two- and three-dimensional patterns on the PECM cathodes, made of the stainless steel 1.4301, including grooves, half spheres, and hexagonal pyramids. The textured tools were tested and validated on an industrial PECM machine PEMCenter8000, by replicating those patterns on workpieces made of Ti-6Al-4V. In this paper, fabrication of the tool patterns using nanosecond laser and and the subsequent quality inspection are introduced, and the first results of the tool validation are presented by comparing the geometrical measurement of the tool patterns to those replicated on the workpieces. It is found that the tool patterns produced by the nanosecond laser have clear surface conditions, and the tool pattern shapes meet the initial design. The geometrical precision of the pattern replications on the workpieces could be strongly influenced by the pattern design, as those sharp edges could cause an anisotropic electric field and instable electrolyte flushing conditions. The molten materials staked on the sharp positions might also be an important factor.
CitationErnst, A.; Llanes, L. Laser surface texturing of PECM tools and the validation. "Procedia CIRP", 2020, vol. 95, p. 891-896.
URIhttp://hdl.handle.net/2117/344018
DOI10.1016/j.procir.2020.01.183
ISSN2212-8271
Publisher versionhttps://www.sciencedirect.com/science/article/pii/S2212827120315419
Collections
Share: