A Robust user association, backhaul routing and switching off model for a 5G network with variable traffic demands 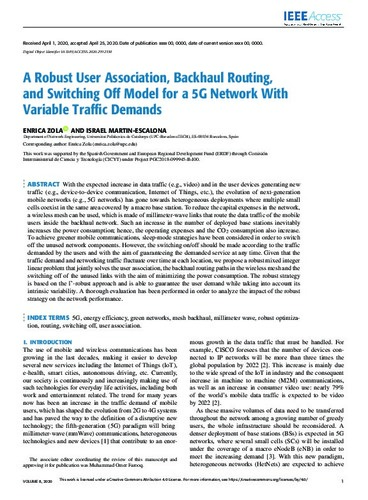 Except where otherwise noted, content on this work is licensed under a Creative Commons license : Attribution-NonCommercial-NoDerivs 3.0 Spain
Abstract
With the expected increase in data traffic (e.g., video) and in the user devices generating new traffic (e.g., device-to-device communication, Internet of Things, etc.), the evolution of next-generation mobile networks (e.g., 5G networks) has gone towards heterogeneous deployments where multiple small cells coexist in the same area covered by a macro base station. To reduce the capital expenses in the network, a wireless mesh can be used, which is made of millimeter-wave links that route the data traffic of the mobile users inside the backhaul network. Such an increase in the number of deployed base stations inevitably increases the power consumption; hence, the operating expenses and the CO2 consumption also increase. To achieve greener mobile communications, sleep-mode strategies have been considered in order to switch off the unused network components. However, the switching on/off should be made according to the traffic demanded by the users and with the aim of guaranteeing the demanded service at any time. Given that the traffic demand and networking traffic fluctuate over time at each location, we propose a robust mixed integer linear problem that jointly solves the user association, the backhaul routing paths in the wireless mesh and the switching off of the unused links with the aim of minimizing the power consumption. The robust strategy is based on the..-robust approach and is able to guarantee the user demand while taking into account its intrinsic variability. A thorough evaluation has been performed in order to analyze the impact of the robust strategy on the network performance.
CitationZola, E.; Martin-Escalona, I. A Robust user association, backhaul routing and switching off model for a 5G network with variable traffic demands. "IEEE access", 13 Maig 2020, vol. 8, p. 96714-96726.
URIhttp://hdl.handle.net/2117/343884
DOI10.1109/ACCESS.2020.2992330
ISSN2169-3536
Publisher versionhttps://ieeexplore.ieee.org/document/9086035
Collections
Share: