Developing an augmented reality application in the framework of architecture degree 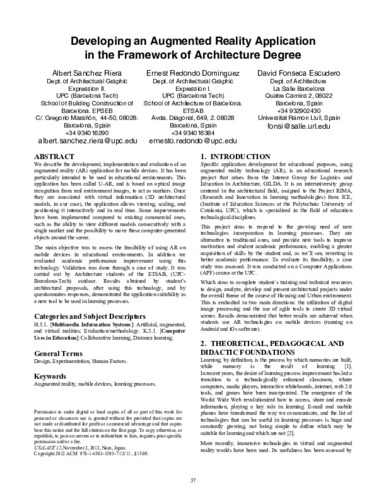 Developing an Augmented Reality Application in the Framework of Architecture Degree (1,365Mb)
Share:

Except where otherwise noted, content on this work is licensed under a Creative Commons license : Attribution-NonCommercial-NoDerivs 3.0 Spain
Abstract
We describe the development, implementation and evaluation of an augmented reality (AR) application for mobile devices. It has been particularly intended to be used in educational environments. This application has been called U-AR, and is based on optical image recognition from real environment images, to act as markers. Once they are associated with virtual information (3D architectural models, in our case), the application allows viewing, scaling, and positioning it interactively and in real time. Some improvements have been implemented compared to existing commercial ones, such as the ability to view different models consecutively with a single marker and the possibility to move these computer-generated objects around the scene. The main objective was to assess the feasibility of using AR on mobile devices in educational environments. In addition we evaluated academic performance improvement using this technology. Validation was done through a case of study. It was carried out by Architecture students of the ETSAB, (UPC-Barcelona-Tech) outdoor. Results obtained by student's architectural proposals, after using this technology, and by questionnaires responses, demonstrated the application suitability as a new tool to be used in learning processes.
Location
1: Avinguda Diagonal, 651, 08028 Barcelona, Espanya
CitationSanchez Riera, A.; Redondo, E.; Fonseca, D. Developing an augmented reality application in the framework of architecture degree. A: International Workshop on User Experience in e-Learning and Augmented Technologies in Education. "UXeLATE '12 Proceedings of the 2012 ACM workshop on user experience in e-learning and augmented technologies in education". New York: Association for Computing Machinery (ACM), 2012, p. 37-42. ISBN 978-1-4503-1593-7. DOI 10.1145/2390895.2390905.
URIhttp://hdl.handle.net/2117/343882
DOI10.1145/2390895.2390905
ISBN978-1-4503-1593-7
Publisher versionhttp://dl.acm.org/citation.cfm?doid=2390895.2390905
Collections
Share: