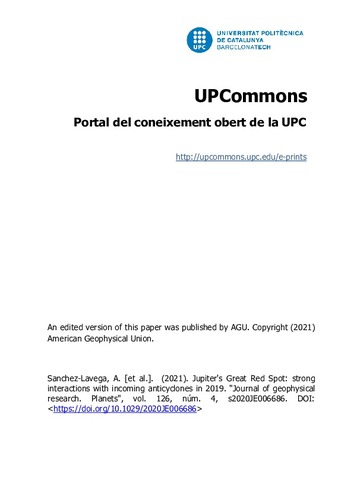 Rojas, Jose Félix
Andrés Carcasona, Marc
Prat Gasull, Arnau
Ordoñez Etxebarria, I
Rogers, John H
Foster, Clyde
Mizumoto, S
Casely, A
Hansen, C. J.
Orton, Glenn S.
Momary, T
Eichstädt, Gerald
Document typeArticle
PublisherWiley
Rights accessOpen Access
Abstract
Jupiter’s Great Red Spot (GRS), a giant anticyclone, is the largest and longest-lived of all the vortices observed in planetary atmospheres. During its history, the GRS has shrunk to half its size since 1879, and encountered many smaller anticyclones and other dynamical features that might tend to erode it. In 2018-2020, while having a historically small size, its structure and even its survival appeared to be threatened when a series of anticyclones moving in from the east tore off large fragments of the red area and distorted its shape. In this work we report observations of the dynamics of these interactions and show that as a result the GRS increased its internal rotation velocity, maintaining its vorticity but decreasing its visible area, and suffering a transient change in its otherwise steady 90-day oscillation in longitude. From a radiative transfer analysis and numerical simulations of the dynamics we show that the interactions affected the upper cloud tops of the GRS. We argue that the intense vorticity of the GRS, together with its larger size and depth compared to the interacting vortices, guarantees its long lifetime.
CitationSanchez-Lavega, A. [et al.]. Jupiter's Great Red Spot: strong interactions with incoming anticyclones in 2019. "Journal of geophysical research. Planets", Abril 2021, vol. 126, núm. 4, p. e2020JE006686/1-e2020JE006686/15.
URIhttp://hdl.handle.net/2117/343816
DOI10.1029/2020JE006686
ISSN2169-9097
Publisher versionhttps://agupubs.onlinelibrary.wiley.com/doi/10.1029/2020JE006686
Collections
Share: