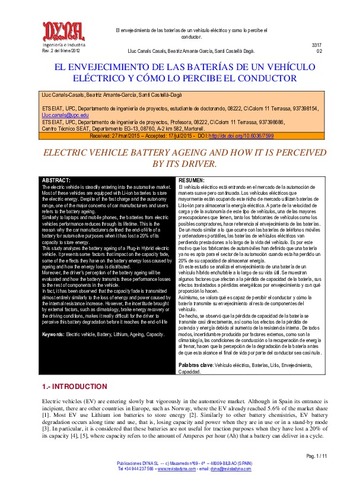 Castellà Daga, Santiago
Document typeArticle
Rights accessOpen Access
Abstract
The electric vehicle is steadily entering into the automotive market. Most of these vehicles are equipped with Li-ion batteries to store the electric energy. Despite of the fast charge and the autonomy range, one of the major concerns of car manufacturers and users refers to the battery ageing. Similarly to laptops and mobile phones, the batteries from electric vehicles performance reduces through its lifetime. This is the reason why car manufacturers defined the end-of-life of a battery for automotive purposes when it has lost a 20% of its capacity to store energy. This study analyzes the battery ageing of a Plug-in Hybrid electric vehicle. It presents some factors that impact on the capacity fade, some of the effects they have on the battery energy loss caused by ageing and how the energy loss is distributed. Moreover, the driver’s perception of the battery ageing will be evaluated and how the battery transmits these performance losses to the rest of components in the vehicle. In fact, it has been observed that the capacity fade is transmitted almost entirely, similarly to the loss of energy and power caused by the internal resistance increase. However, the incertitude brought by external factors, such as climatology, brake energy recovery or the driving conditions, makes it really difficult for the driver to perceive this battery degradation before it reaches the end-of-life.
CitationCanals Casals, L.; Amante, B.; Castellà, S. El envejecimiento de las baterías de un vehículo eléctrico y cómo lo percibe el conductor. "Dyna ingeniería e industria", 1 Març 2016, vol. 91, núm. 2, p. 188-195.
URIhttp://hdl.handle.net/2117/343806
DOI10.6036/7599
ISSN0012-7361
Publisher versionhttp://www.revistadyna.com/busqueda/el-envejecimiento-de-baterias-de-un-vehiculo-electrico-y-como-lo-percibe-conductor
Collections
Share: