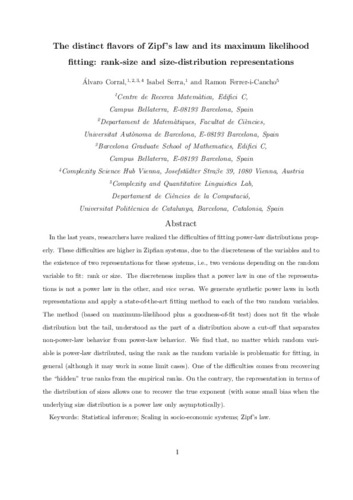 Document typeArticle
PublisherAmerican Institute of Physics (AIP)
Rights accessOpen Access
Abstract
In recent years, researchers have realized the difficulties of fitting power-law distributions properly. These difficulties are higher in Zipfian systems, due to the discreteness of the variables and to the existence of two representations for these systems, i.e., two versions depending on the random variable to fit: rank or size. The discreteness implies that a power law in one of the representations is not a power law in the other, and vice versa. We generate synthetic power laws in both representations and apply a state-of-the-art fitting method to each of the two random variables. The method (based on maximum likelihood plus a goodness-of-fit test) does not fit the whole distribution but the tail, understood as the part of a distribution above a cutoff that separates non-power-law behavior from power-law behavior. We find that, no matter which random variable is power-law distributed, using the rank as the random variable is problematic for fitting, in general (although it may work in some limit cases). One of the difficulties comes from recovering the “hidden” true ranks from the empirical ranks. On the contrary, the representation in terms of the distribution of sizes allows one to recover the true exponent (with some small bias when the underlying size distribution is a power law only asymptotically).
CitationCorral, Á.; Serra, I.; Ferrer-i-Cancho, R. Distinct flavors of Zipf's law and its maximum likelihood fitting: Rank-size and size-distribution representations. "Physical review E", 10 Novembre 2020, vol. 102, núm. 5, article 052113, p. 1-17.
URIhttp://hdl.handle.net/2117/343758
DOI10.1103/PhysRevE.102.052113
ISSN2470-0053
Publisher versionhttps://journals.aps.org/pre/abstract/10.1103/PhysRevE.102.052113
Collections
Share: