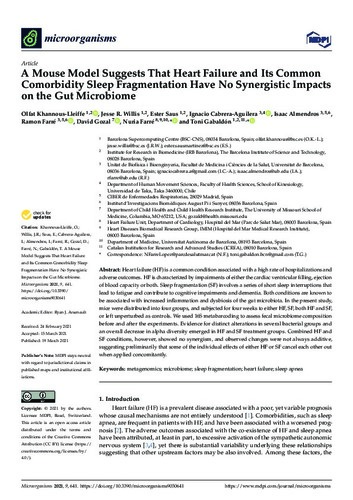 Except where otherwise noted, content on this work is licensed under a Creative Commons license : Attribution 3.0 Spain
ProjectRETVOLUTION - Reticulate evolution: patterns and impacts of non-vertical inheritance in eukaryotic genomes. (EC-H2020-724173)
Abstract
Heart failure (HF) is a common condition associated with a high rate of hospitalizations and adverse outcomes. HF is characterized by impairments of either the cardiac ventricular filling, ejection of blood capacity or both. Sleep fragmentation (SF) involves a series of short sleep interruptions that lead to fatigue and contribute to cognitive impairments and dementia. Both conditions are known to be associated with increased inflammation and dysbiosis of the gut microbiota. In the present study, mice were distributed into four groups, and subjected for four weeks to either HF, SF, both HF and SF, or left unperturbed as controls. We used 16S metabarcoding to assess fecal microbiome composition before and after the experiments. Evidence for distinct alterations in several bacterial groups and an overall decrease in alpha diversity emerged in HF and SF treatment groups. Combined HF and SF conditions, however, showed no synergism, and observed changes were not always additive, suggesting preliminarily that some of the individual effects of either HF or SF cancel each other out when applied concomitantly
CitationKhannous Lleiffe, O. [et al.]. A mouse model suggests that heart failure and its common comorbidity sleep fragmentation have no synergistic impacts on the gut microbiome. "Microorganisms", 2021, vol. 9, núm. 3, 641.
URIhttp://hdl.handle.net/2117/343746
DOI10.3390/microorganisms9030641
ISSN2076-2607
Publisher versionhttps://www.mdpi.com/2076-2607/9/3/641
Collections
Share: