Xenon-133 and caesium-137 releases into the atmosphere from the Fukushima Dai-ichi nuclear power plant: Determination of the source term, atmospheric dispersion, and deposition 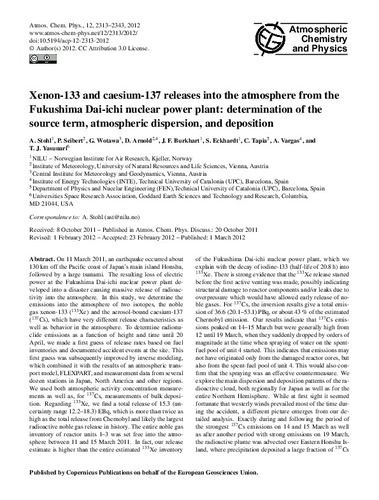 Except where otherwise noted, content on this work is licensed under a Creative Commons license : Attribution-NonCommercial-NoDerivs 3.0 Spain
Abstract
On 11 March 2011, an earthquake occurred about 130 km off the Pacific coast of Japan's main island Honshu, followed by a large tsunami. The resulting loss of electric power at the Fukushima Dai-ichi nuclear power plant developed into a disaster causing massive release of radioactivity into the atmosphere. In this study, we determine the emissions into the atmosphere of two isotopes, the noble gas xenon-133 (133Xe) and the aerosol-bound caesium-137 (137Cs), which have very different release characteristics as well as behavior in the atmosphere. To determine radionuclide emissions as a function of height and time until 20 April, we made a first guess of release rates based on fuel inventories and documented accident events at the site. This first guess was subsequently improved by inverse modeling, which combined it with the results of an atmospheric transport model, FLEXPART, and measurement data from several dozen stations in Japan, North America and other regions. We used both atmospheric activity concentration measurements as well as, for 137Cs, measurements of bulk deposition. Regarding 133Xe, we find a total release of 15.3 (uncertainty range 12.2–18.3) EBq, which is more than twice as high as the total release from Chernobyl and likely the largest radioactive noble gas release in history. The entire noble gas inventory of reactor units 1–3 was set free into the atmosphere between 11 and 15 March 2011. In fact, our release estimate is higher than the entire estimated 133Xe inventory of the Fukushima Dai-ichi nuclear power plant, which we explain with the decay of iodine-133 (half-life of 20.8 h) into 133Xe. There is strong evidence that the 133Xe release started before the first active venting was made, possibly indicating structural damage to reactor components and/or leaks due to overpressure which would have allowed early release of noble gases. For 137Cs, the inversion results give a total emission of 36.6 (20.1–53.1) PBq, or about 43% of the estimated Chernobyl emission. Our results indicate that 137Cs emissions peaked on 14–15 March but were generally high from 12 until 19 March, when they suddenly dropped by orders of magnitude at the time when spraying of water on the spent-fuel pool of unit 4 started. This indicates that emissions may not have originated only from the damaged reactor cores, but also from the spent-fuel pool of unit 4. This would also confirm that the spraying was an effective countermeasure. We explore the main dispersion and deposition patterns of the radioactive cloud, both regionally for Japan as well as for the entire Northern Hemisphere. While at first sight it seemed fortunate that westerly winds prevailed most of the time during the accident, a different picture emerges from our detailed analysis. Exactly during and following the period of the strongest 137Cs emissions on 14 and 15 March as well as after another period with strong emissions on 19 March, the radioactive plume was advected over Eastern Honshu Island, where precipitation deposited a large fraction of 137Cs on land surfaces. Radioactive clouds reached North America on 15 March and Europe on 22 March. By middle of April, 133Xe was fairly uniformly distributed in the middle latitudes of the entire Northern Hemisphere and was for the first time also measured in the Southern Hemisphere (Darwin station, Australia). In general, simulated and observed concentrations of 133Xe and 137Cs both at Japanese as well as at remote sites were in good quantitative agreement. Altogether, we estimate that 6.4 PBq of 137Cs, or 18% of the total fallout until 20 April, were deposited over Japanese land areas, while most of the rest fell over the North Pacific Ocean. Only 0.7 PBq, or 1.9% of the total fallout were deposited on land areas other than Japan.
CitationStohl, A. [et al.]. Xenon-133 and caesium-137 releases into the atmosphere from the Fukushima Dai-ichi nuclear power plant: Determination of the source term, atmospheric dispersion, and deposition. "Atmospheric chemistry and physics discussions", 1 Març 2012, vol. 12, núm. 5, p. 28319-28394.
URIhttp://hdl.handle.net/2117/343543
DOI10.5194/acp-12-2313-2012
ISSN1680-7367
Publisher versionhttps://acp.copernicus.org/articles/12/2313/2012/acp-12-2313-2012-discussion.html
Collections
Share: