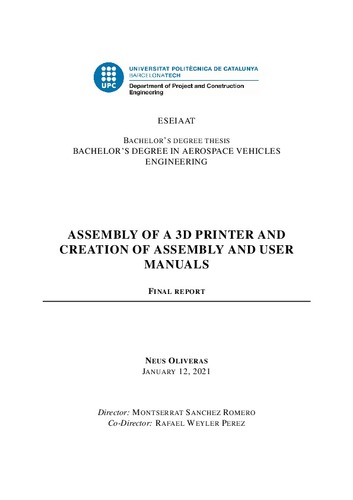 Document typeBachelor thesis
Rights accessOpen Access
Abstract
The present report explains the process, the methods and the results of this project which consists on the assembly a 3D printer, specifically the Anet A8, and the creation of an assembly manual and a user manual. The process was started with the assembly of the printer. The assembly was done by following the official Anet instructions and other resources.The critical part of the assembly was the installation of the bearings. Due to the bearings being very noisy and not smooth, a research process was prompted, which ended with the decision of replacing the bearings for Igus DryLin bearings, replacing the belt with a fiber glass reinforced one and the installation of a MOSFET. All of this modifications were done to improve the printer quality or its safety. The assembly of the printer was finished without any other issues. Regarding the assembly manual, the original intention was to use the documentation of the assembly process to construct a comprehensive manual. However, it was quickly seen that that method would not work as it had too much text and the images, which were pictures taken during the assembly, were not comprehensive enough. The second method followed was to use a 3D model of the Anet A8, done by GrabCad user Przemysław Wojtera, to obtain comprehensive images of the assembly process without the need of much text. The 3D model did need some modification and replacement of some parts, some of which were obtained through 3D models by other users, and some of which were made from scratch. The obtainment of the images and the parts was done using SolidWorks, and once all the content was finished, the format of this manual was done using Canva. The user manual was created through a combination of research of the general knowledge of the 3D printing process and the experience obtained by starting to 3D print. The final result of this project, which has achieved its aim, is a functional Anet A8 and two manuals, an assembly manual and a user manual, that can guide a beginner to 3D printing of the process needed to start printing
SubjectsThree-dimensional printing, Printers (Data processing systems), Impressió 3D, Impressora 3D, Impressores (Ordinadors) -- Disseny i construcció
DegreeGRAU EN ENGINYERIA EN VEHICLES AEROESPACIALS (Pla 2010)
URIhttp://hdl.handle.net/2117/343514
Collections
Share: