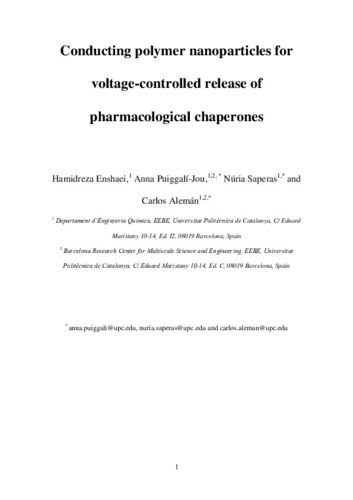 Document typeArticle
PublisherRoyal Society of Chemistry
Rights accessOpen Access
Abstract
Pharmacological chaperones (PCs) are low-molecular weight chemical molecules used in patients for the treatment of some rare diseases caused primarily by protein instability. A controlled and on-demand release of PCs via nanoparticles is an alternative for cases in which long treatments are needed and prolonged oral administration could have adverse effects. In this work, pyrimethamine (PYR), which is a potent PC consisting of pyrimidine-2,4-diamine substituted at position 5 by a p-chlorophenyl group and at position 6 by an ethyl group, was successfully loaded in electroresponsive poly(3,4-ethylenedioxythiophene) nanoparticles (PEDOT NPs). The PYR-loading capacity was 11.4 ± 1.5%, with both loaded and unloaded PEDOT NPs exhibiting similar sizes (215 ± 3 and 203 ± 1 nm, respectively) and net surface charges (-26 ± 7 and -29 ± 6 mV, respectively). In the absence of electrical stimulus, the release of PC from loaded NPs is very low (1.6% in 24 h and 18% in 80 days) in aqueous environments. Instead, electrical stimuli that sustained for 30 min enhanced the release of PYR, which was ~50% when the voltage was scanned from –0.5 V to 0.5 V (cyclic voltammetry) and ~35% when a constant voltage of 1.0 V was applied (chronoamperometry).
CitationEnshaei, H. [et al.]. Conducting polymer nanoparticles for voltage-controlled release of pharmacological chaperones. "Soft Matter", 2021, vol. 17, núm. 12, p. 3314-3321.
URIhttp://hdl.handle.net/2117/343511
DOI10.1039/D1SM00036E
ISSN1744-6848
Publisher versionhttps://pubs.rsc.org/en/content/articlelanding/2021/SM/D1SM00036E
Collections
Share: