The introduction of the glaze in al-Andalus: Technological waves and Oriental influences 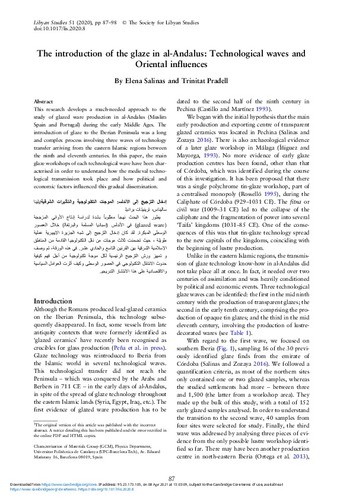 Document typeArticle
Rights accessOpen Access
Abstract
This research develops a much-needed approach to the study of glazed ware production in al-Andalus (Muslim Spain and Portugal) during the early Middle Ages. The introduction of glaze to the Iberian Peninsula was a long and complex process involving three waves of technology transfer arriving from the eastern Islamic regions between the ninth and eleventh centuries. In this paper, the main glaze workshops of each technological wave have been characterised in order to understand how the medieval technological transmission took place and how political and economic factors influenced this gradual dissemination.
CitationSalinas-Pleguezuelo, E.; Pradell, T. The introduction of the glaze in al-Andalus: Technological waves and Oriental influences. "Libyan Studies", 1 Novembre 2020, vol. 51, p. 87-98.
URIhttp://hdl.handle.net/2117/343338
DOI10.1017/lis.2020.8
ISSN2052-6148
Publisher versionhttps://www.cambridge.org/core/journals/libyan-studies/article/abs/introduction-of-the-glaze-in-alandalus-technological-waves-and-oriental-influences/F74F285BA92F6A145D142325B91B540A
Collections
Share: