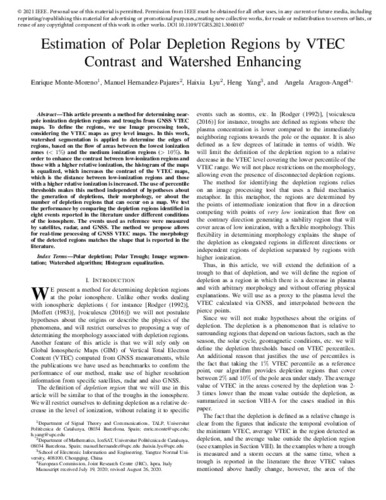 Yang, Heng
Aragon-Angel, Angela
Document typeArticle
PublisherInstitute of Electrical and Electronics Engineers (IEEE)
Rights accessOpen Access
Abstract
This article presents a method for determining near-Pole ionization depletion regions and troughs from global navigation satellite system (GNSS) vertical total electron content (VTEC) maps. To define the regions, we use Image processing tools, considering the VTEC maps as gray-level images. In this work, watershed segmentation is applied to determine the edges of regions, based on the flow of areas between the lowest ionization zones (<1%) and the medium ionization regions (>10%). In order to enhance the contrast between low-ionization regions and those with a higher relative ionization, the histogram of the maps is equalized, which increases the contrast of the VTEC maps, which is the distance between low-ionization regions and those with a higher relative ionization are increased. The use of percentile thresholds makes this method independent of hypotheses about the generation of depletions, their morphology, or the number of depletion regions that can occur on a map. We test the performance by comparing the depletion regions identified in eight events reported in the literature under different conditions of the ionosphere. The events used as reference were measured by satellites, radar, and GNSS. The method that we propose allows for real-time processing of GNSS VTEC maps. The morphology of the detected regions matches the shape that is reported in the literature.
CitationMonte, E. [et al.]. Estimation of polar depletion regions by VTEC contrast and watershed enhancing. "IEEE transactions on geoscience and remote sensing", 2021, p. 1-20.
URIhttp://hdl.handle.net/2117/343275
DOI10.1109/TGRS.2021.3060107
ISSN0196-2892
Publisher versionhttps://ieeexplore.ieee.org/abstract/document/9366298
Collections
Share: