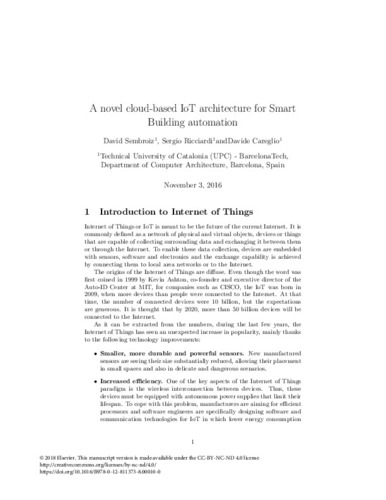 Salvo que se indique lo contrario, los contenidos de esta obra estan sujetos a la licencia de Creative Commons : Reconocimiento-NoComercial-SinObraDerivada 4.0 Internacional
ProyectoINFRAESTRUCTURA DE RED SOSTENIBLE PARA LA FUTURA SOCIEDAD DIGITAL (MINECO-TEC2014-59583-C2-2-R)
Resumen
The Internet of Things (IoT) is meant to be the future of the current Internet. It is commonly defined as a network of physical and virtual objects, devices, or things that are capable of collecting surrounding data and exchanging it between them or through the Internet. To enable data collection, devices are embedded with sensors, software, and electronics; the exchange capability is achieved by connecting them to local area networks or to the Internet. The origins of the Internet of Things are diffuse. Even though the word was first coined in 1999 by Kevin Ashton, co-founder and executive director of the Auto-ID Center at MIT, for companies such as CISCO, the IoT was born in 2009, when more devices than people were connected to the Internet. At that time, the number of connected devices were 10 billion, but the expectations are generous. It is thought that by 2020, more than 50 billion devices will be connected to the Internet. As it can be extracted from the numbers, during the last few years, the Internet of Things has seen an unexpected increase in popularity, mainly thanks to technology improvements. The combination of these improvements has created the new market opportunities that companies have foreseen. Since the Internet of Things is in a very young state, the lack of coordination, and the rapidness with which new gadgets, are created are hampering the standardization of the future Internet.
CitaciónSembroiz, D.; Ricciardi, S.; Careglio, D. Chapter 10- A novel cloud-based IoT architecture for smart building automation. A: "Security and resilience in intelligent data-centric systems and communication networks". Elsevier, 2018, p. 215-233.
URIhttp://hdl.handle.net/2117/343263
DOI10.1016/B978-0-12-811373-8.00010-0
ISBN978-0-12-811373-8
Versión del editorhttps://www.sciencedirect.com/book/9780128113738/security-and-resilience-in-intelligent-data-centric-systems-and-communication-networks?via=ihub=
Colecciones
Comparte: