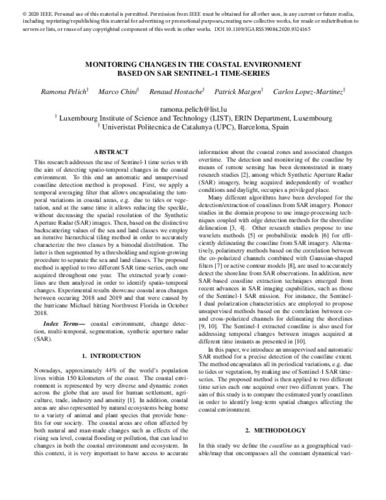 Document typeConference report
PublisherInstitute of Electrical and Electronics Engineers (IEEE)
Rights accessOpen Access
Abstract
This research addresses the use of Sentinel-1 time series with the aim of detecting spatio-temporal changes in the coastal environment. To this end an automatic and unsupervised coastline detection method is proposed. First, we apply a temporal averaging filter that allows encapsulating the temporal variations in coastal areas, e.g. due to tides or vegetation, and at the same time it allows reducing the speckle, without decreasing the spatial resolution of the Synthetic Aperture Radar (SAR) images. Then, based on the distinctive backscattering values of the sea and land classes we employ an iterative hierarchical tiling method in order to accurately characterize the two classes by a bimodal distribution. The latter is then segmented by a thresholding and region-growing procedure to separate the sea and land classes. The proposed method is applied to two different SAR time-series, each one acquired throughout one year. The extracted yearly coastlines are then analyzed in order to identify spatio-temporal changes. Experimental results showcase coastal area changes between occuring 2018 and 2019 and that were caused by the hurricane Michael hitting Northwest Florida in October 2018.
CitationPelich, R. [et al.]. Monitoring changes in the coastal environment based on SAR Sentinel-1 time-series. A: IEEE International Geoscience and Remote Sensing Symposium. "IGARSS 2020: 2020 IEEE International Geoscience and Remote Sensing Symposium Proceedings: September 26 - October 2, 2020: virtual symposium". Institute of Electrical and Electronics Engineers (IEEE), 2020, p. 6666-6669. ISBN 978-1-7281-6374-1. DOI 10.1109/IGARSS39084.2020.9324165.
URIhttp://hdl.handle.net/2117/342794
DOI10.1109/IGARSS39084.2020.9324165
ISBN978-1-7281-6374-1
Publisher versionhttps://ieeexplore.ieee.org/document/9324165/
Collections
Share: