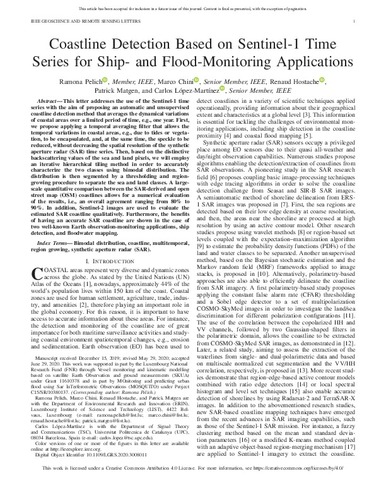 Document typeArticle
Rights accessOpen Access
Abstract
This letter addresses the use of the Sentinel-1 time series with the aim of proposing an automatic and unsupervised coastline detection method that averages the dynamical variations of coastal areas over a limited period of time, e.g., one year. First, we propose applying a temporal averaging filter that allows the temporal variations in coastal areas, e.g., due to tides or vegetation, to be encapsulated, and, at the same time, the speckle to be reduced, without decreasing the spatial resolution of the synthetic aperture radar (SAR) time series. Then, based on the distinctive backscattering values of the sea and land pixels, we will employ an iterative hierarchical tiling method in order to accurately characterize the two classes using bimodal distribution. The distribution is then segmented by a thresholding and region-growing procedure to separate the sea and land classes. A large-scale quantitative comparison between the SAR-derived and open street map (OSM) coastlines allows for a numerical evaluation of the results, i.e., an overall agreement ranging from 80% to 90%. In addition, Sentinel-2 images are used to evaluate the estimated SAR coastline qualitatively. Furthermore, the benefits of having an accurate SAR coastline are shown in the case of two well-known Earth observation-monitoring applications, ship detection, and floodwater mapping.
CitationPelich, R. [et al.]. Coastline detection based on Sentinel-1 time series for ship- and flood-monitoring applications. "IEEE geoscience and remote sensing letters", 2020, p. 1-5.
URIhttp://hdl.handle.net/2117/342782
DOI10.1109/LGRS.2020.3008011
ISSN1545-598X
Publisher versionhttps://ieeexplore.ieee.org/document/9144284
Collections
Share: