Side channel attack on a partially encrypted MPEG-G file 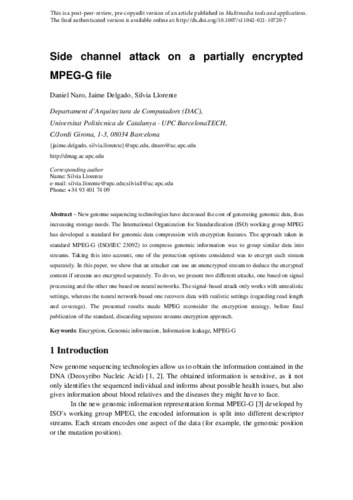 Document typeArticle
Rights accessOpen Access
Abstract
New genome sequencing technologies have decreased the cost of generating genomic data, thus increasing storage needs. The International Organization for Standardization (ISO) working group MPEG has developed a standard for genomic data compression with encryption features. The approach taken in standard MPEG-G (ISO/IEC 23092) to compress genomic information was to group similar data into streams. Taking this into account, one of the protection options considered was to encrypt each stream separately. In this paper, we show that an attacker can use an unencrypted stream to deduce the encrypted content if streams are encrypted separately. To do so, we present two different attacks, one based on signal processing and the other one based on neural networks. The signal-based attack only works with unrealistic settings, whereas the neural network-based one recovers data with realistic settings (regarding read length and coverage). The presented results made MPEG reconsider the encryption strategy, before final publication of the standard, discarding separate streams encryption approach.
CitationNaro, D.; Delgado, J.; Llorente, S. Side channel attack on a partially encrypted MPEG-G file. "Multimedia tools and applications", Maig 2021, vol. 80, núm. 3, p. 20599-20618.
URIhttp://hdl.handle.net/2117/342757
DOI10.1007/s11042-021-10720-7
ISSN1380-7501
Publisher versionhttps://link.springer.com/article/10.1007%2Fs11042-021-10720-7
Collections
Share: