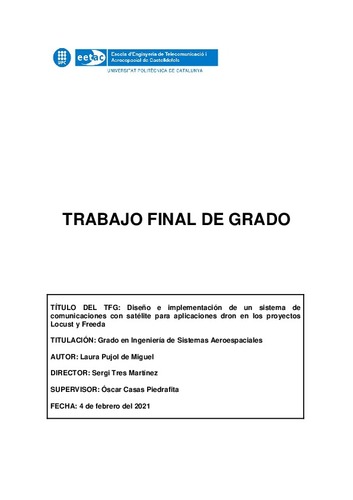 gmail.com
Tutor / directorCasas Piedrafita, Oscar; Tres Martínez, Sergi
CovenanteeHemav
Document typeBachelor thesis
Rights accessOpen Access
Abstract
The aim of this project is to design and develop a satellite communications system for an Unmanned Aerial Vehicle able to be implemented on Hemav Foundation projects called Locust and Freeda. HEMAV Foundation is a non-profit entity which extends the HEMAV S.L. activity. Freeda project in collaboration with Proactiva OpenArms has the main objective of fighting against the humanitarian crisis on the Mediterranean Sea. The rescue tasks would be eased with a drone capable of detecting boats autonomously so the search process Will be faster and more effective than would be with the Proactiva¿s boat. The Locust Project in collaboration with FAO has the purpose of helping to fight against the desert Locust swarms that cause famine in countries such as Sudan, Kenya, Saudi Arabia, India, etc. To provide the FAO teams with the right tools to speed up the search process at such a huge area as the desert is decisive, as it is affecting the agricultural production not only in Africa is facing the worst desert Locust crisis in over 25 years but also the Middle East and Asia. Similarly, as found on Freeda¿s project, Hemav Foundation has developed a drone capable of carrying out the detection of living vegetation, as it is a place with high probability of having Locust swarms. This method would also complement the current methods, that consist on searching through the desert by car with a previous screening by satellite images. Both projects have the need of a communications system that is capable of maintaining the users informed about the drone position in real time, and also, should be also capable of permit the users make decisions as make the drone return to launch.
SubjectsDrone aircraft--Technological innovations, Avions no tripulats -- Equip electrònic
DegreeGRAU EN ENGINYERIA DE SISTEMES AEROESPACIALS (Pla 2015)
URIhttp://hdl.handle.net/2117/342607
Collections
Share: