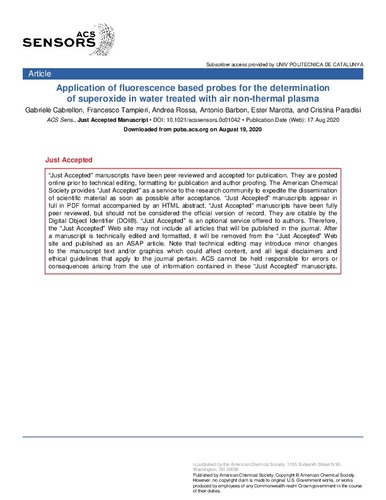 Except where otherwise noted, content on this work is licensed under a Creative Commons license : Attribution-NonCommercial-NoDerivs 3.0 Spain
Abstract
Superoxide is one of the reactive oxygen species (ROS) in non-thermal plasmas generated by electrical discharges in air at room temperature and atmospheric pressure. One important application of such plasmas is the activation of advanced oxidation processes for air and water decontaminating treatments. When in contact with aqueous media, ROS and notably superoxide can react at the plasma/liquid interface or transfer and react into the liquid. While the detection of superoxide in plasma-treated water has been reported in the literature, to the best of our knowledge, quantitative determinations are lacking. We report here the determination of superoxide rate of formation and steady-state concentration in water subjected to air non-thermal plasma in a streamer discharge reactor used previously to treat various organic contaminants. After detecting the presence of superoxide by spin-trapping and electron paramagnetic resonance analyses, we applied superoxide-selective fluorescent probes to carry out quantitative determinations. The first probe tested, 3',6'-bis(diphenylphosphinyl) fluorescein (PF-1), was not sufficiently soluble, but the second one, fluorescein-bis-[(N-methylpyridinium-3-yl)sulfonate iodide] (FMSI), was applied successfully. Under typical plasma operating conditions, the rate of superoxide formation and its steady-state concentration were (0.27 ± 0.15) µM s–1 and (0.007 ± 0.004) nM, respectively. The procedure outlined here can be usefully applied to detect and quantify superoxide in water treated by different plasma sources in various types of plasma reactors.
CitationCabrellon, G. [et al.]. Application of fluorescence-based probes for the determination of superoxide in water treated with air non-thermal plasma. "ACS Sensors", 25 Setembre 2020, vol. 5, núm. 9, p. 2866-2875.
URIhttp://hdl.handle.net/2117/342540
DOI10.1021/acssensors.0c01042
ISSN2379-3694
Publisher versionhttps://pubs.acs.org/doi/10.1021/acssensors.0c01042
Collections
Share: