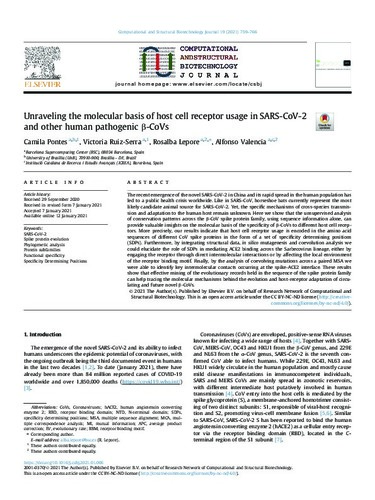 Document typeArticle
PublisherElsevier
Rights accessOpen Access
European Commission's projectEXSCALATE4CoV - EXaSCale smArt pLatform Against paThogEns for Corona Virus (EC-H2020-101003551)
Abstract
The recent emergence of the novel SARS-CoV-2 in China and its rapid spread in the human population has led to a public health crisis worldwide. Like in SARS-CoV, horseshoe bats currently represent the most likely candidate animal source for SARS-CoV-2. Yet, the specific mechanisms of cross-species transmission and adaptation to the human host remain unknown. Here we show that the unsupervised analysis of conservation patterns across the β-CoV spike protein family, using sequence information alone, can provide valuable insights on the molecular basis of the specificity of β-CoVs to different host cell receptors. More precisely, our results indicate that host cell receptor usage is encoded in the amino acid sequences of different CoV spike proteins in the form of a set of specificity determining positions (SDPs). Furthermore, by integrating structural data, in silico mutagenesis and coevolution analysis we could elucidate the role of SDPs in mediating ACE2 binding across the Sarbecovirus lineage, either by engaging the receptor through direct intermolecular interactions or by affecting the local environment of the receptor binding motif. Finally, by the analysis of coevolving mutations across a paired MSA we were able to identify key intermolecular contacts occurring at the spike-ACE2 interface. These results show that effective mining of the evolutionary records held in the sequence of the spike protein family can help tracing the molecular mechanisms behind the evolution and host-receptor adaptation of circulating and future novel β-CoVs.
CitationPontes, C. [et al.]. Unraveling the molecular basis of host cell receptor usage in SARS-CoV-2 and other human pathogenic β-CoVs. "Computational and Structural Biotechnology Journal", 2021, vol. 19, p. 759-766.
URIhttp://hdl.handle.net/2117/342474
DOI10.1016/j.csbj.2021.01.006
ISSN2001-0370
Publisher versionhttps://www.sciencedirect.com/science/article/pii/S2001037021000106?via%3Dihub
Collections
Share: