Radicals and ions formed in plasma-treated organic solvents: a mechanistic investigation to rationalize the enhancement of electrospinnability of polycaprolactont 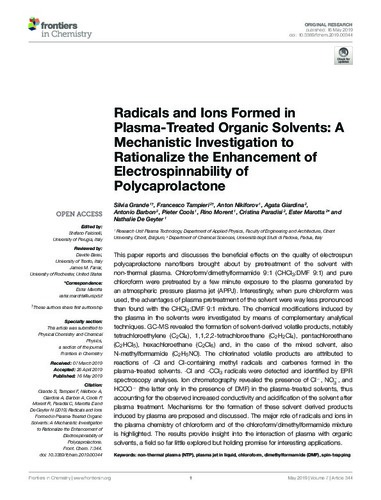 Except where otherwise noted, content on this work is licensed under a Creative Commons license : Attribution-NonCommercial-NoDerivs 4.0 International
Abstract
This paper reports and discusses the beneficial effects on the quality of electrospun polycaprolactone nanofibers brought about by pretreatment of the solvent with non-thermal plasma. Chloroform/dimethylformamide 9:1 (CHCl3:DMF 9:1) and pure chloroform were pretreated by a few minute exposure to the plasma generated by an atmospheric pressure plasma jet (APPJ). Interestingly, when pure chloroform was used, the advantages of plasma pretreatment of the solvent were way less pronounced than found with the CHCl3:DMF 9:1 mixture. The chemical modifications induced by the plasma in the solvents were investigated by means of complementary analytical techniques. GC-MS revealed the formation of solvent-derived volatile products, notably tetrachloroethylene (C2Cl4), 1,1,2,2-tetrachloroethane (C2H2Cl4), pentachloroethane (C2HCl5), hexachloroethane (C2Cl6) and, in the case of the mixed solvent, also N-methylformamide (C2H5NO). The chlorinated volatile products are attributed to reactions of ·Cl and Cl-containing methyl radicals and carbenes formed in the plasma-treated solvents. ·Cl and ·CCl3 radicals were detected and identified by EPR spectroscopy analyses. Ion chromatography revealed the presence of Cl-, NO- 3 , and HCOO- (the latter only in the presence of DMF) in the plasma-treated solvents, thus accounting for the observed increased conductivity and acidification of the solvent after plasma treatment. Mechanisms for the formation of these solvent derived products induced by plasma are proposed and discussed. The major role of radicals and ions in the plasma chemistry of chloroform and of the chloroform/dimethylformamide mixture is highlighted. The results provide insight into the interaction of plasma with organic solvents, a field so far little explored but holding promise for interesting applications.
CitationGrande, S. [et al.]. Radicals and ions formed in plasma-treated organic solvents: a mechanistic investigation to rationalize the enhancement of electrospinnability of polycaprolactont. "Frontiers in chemistry (Lausanne)", 16 Maig 2019, vol. 7, p. 344/1-344/11.
URIhttp://hdl.handle.net/2117/342412
DOI10.3389/fchem.2019.00344
ISSN2296-2646
Publisher versionhttps://www.frontiersin.org/articles/10.3389/fchem.2019.00344/full
Collections
Share: