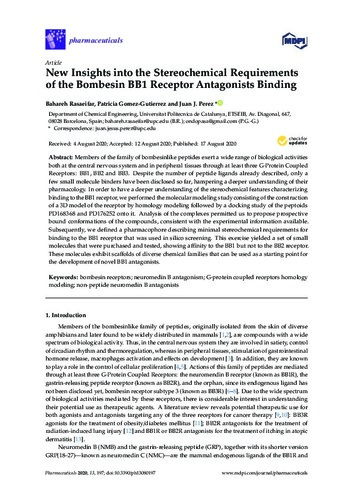 Document typeArticle
Rights accessOpen Access
Abstract
Members of the family of bombesinlike peptides exert a wide range of biological activities both at the central nervous system and in peripheral tissues through at least three G-Protein Coupled Receptors: BB1, BB2 and BB3. Despite the number of peptide ligands already described, only a few small molecule binders have been disclosed so far, hampering a deeper understanding of their pharmacology. In order to have a deeper understanding of the stereochemical features characterizing binding to the BB1 receptor, we performed the molecular modeling study consisting of the construction of a 3D model of the receptor by homology modeling followed by a docking study of the peptoids PD168368 and PD176252 onto it. Analysis of the complexes permitted us to propose prospective bound conformations of the compounds, consistent with the experimental information available. Subsequently, we defined a pharmacophore describing minimal stereochemical requirements for binding to the BB1 receptor that was used in silico screening. This exercise yielded a set of small molecules that were purchased and tested, showing affinity to the BB1 but not to the BB2 receptor. These molecules exhibit scaffolds of diverse chemical families that can be used as a starting point for the development of novel BB1 antagonists.
CitationRasaeifar, B.; Gomez, P.; Perez, J. New insights into the stereochemical requirements of the bombesin BB1 receptor antagonists binding. "Pharmaceuticals", 17 Agost 2020, vol. 13, núm. 8, p. 197:1-197:16.
URIhttp://hdl.handle.net/2117/342002
DOI10.3390/ph13080197
ISSN1424-8247
Publisher versionhttps://www.mdpi.com/1424-8247/13/8/197
Collections
Share: