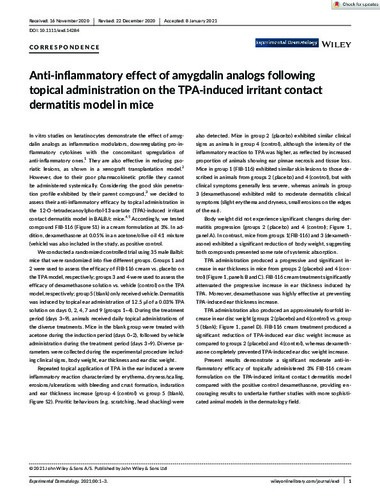 Document typeArticle
Rights accessOpen Access
Abstract
Amygdalin is a cyanogenic glycoside found in seeds of apricots, peaches, almonds, and other rosaceous stone fruits. A few years ago, amygdalin was identified as a peptidomimetic of peptide T, a compound that had been described as effective for the treatment of psoriasis in humans. Subsequently, amygdalin analogs -derivatives of amygdalin with the cyanide group removed to reduce its toxicity- were shown to reduce the inflammatory response to a LPS insult in keratinocytes and subsequently, as promising molecules for the treatment of psoriasis in a xenograft transplantation model via intravenous administration. However, their low pharmacokinetic profile precludes them their use by oral administration as therapeutic agents, pointing towards a possible use by topical administration. In order to evaluate their efficacy for the treatment of psoriasis by topical administration, we conducted a study to evaluate the efficacy of one of these analogs in the TPA-induced irritant contact dermatitis mouse model. The results of this study, reported in the present work, show that the compound is effective in reducing the inflammatory response produced after a repeated application of TPA to the skin of mice. Dexamethasone was also included in the study for the sake of comparison, as positive control.
CitationPerez, J. Anti-inflammatory effect of amygdalin analogs following topical administration on the TPA-induced irritant contact dermatitis model in mice. "Experimental dermatology", 26 Gener 2021,
URIhttp://hdl.handle.net/2117/341998
DOI10.1111/exd.14284
ISSN0906-6705
Publisher versionhttps://onlinelibrary.wiley.com/doi/full/10.1111/exd.14284
Collections
Share: