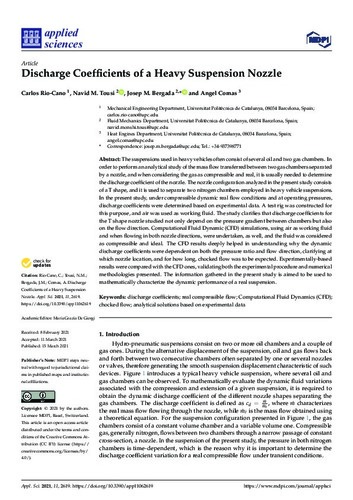 Document typeArticle
PublisherMDPI
Rights accessOpen Access
Abstract
The suspensions used in heavy vehicles often consist of several oil and two gas chambers. In order to perform an analytical study of the mass flow transferred between two gas chambers separated by a nozzle, and when considering the gas as compressible and real, it is usually needed to determine the discharge coefficient of the nozzle. The nozzle configuration analyzed in the present study consists of a T shape, and it is used to separate two nitrogen chambers employed in heavy vehicle suspensions. In the present study, under compressible dynamic real flow conditions and at operating pressures, discharge coefficients were determined based on experimental data. A test rig was constructed for this purpose, and air was used as working fluid. The study clarifies that discharge coefficients for the T shape nozzle studied not only depend on the pressure gradient between chambers but also on the flow direction. Computational Fluid Dynamic (CFD) simulations, using air as working fluid and when flowing in both nozzle directions, were undertaken, as well, and the fluid was considered as compressible and ideal. The CFD results deeply helped in understanding why the dynamic discharge coefficients were dependent on both the pressure ratio and flow direction, clarifying at which nozzle location, and for how long, chocked flow was to be expected. Experimentally-based results were compared with the CFD ones, validating both the experimental procedure and numerical methodologies presented. The information gathered in the present study is aimed to be used to mathematically characterize the dynamic performance of a real suspension
CitationRio, C. [et al.]. Discharge coefficients of a heavy suspension nozzle. "Applied sciences", 15 Març 2021, vol. 11, núm. 6, p. 2619:1-2619:19.
URIhttp://hdl.handle.net/2117/341863
DOI10.3390/app11062619
ISSN2076-3417
Publisher versionhttps://www.mdpi.com/2076-3417/11/6/2619
Collections
Share: