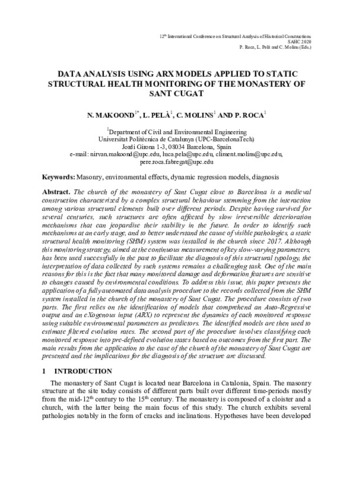 Document typeConference report
PublisherInternational Centre for Numerical Methods in Engineering (CIMNE)
Rights accessOpen Access
ProjectEVALUACION MULTINIVEL DE LA VULNERABILIDADD SISMICA Y MITIGACION DE RIESGO DE EDIFICIOS DE OBRA DE FABRICA EN CENTROS URBANOS HISTORICOS RESILIENTES (AEI-RTI2018-099589-B-I00)
Abstract
The church of the monastery of Sant Cugat close to Barcelona is a medieval construction characterized by a complex structural behaviour stemming from the interaction among various structural elements built over different periods. Despite having survived for several centuries, such structures are often affected by slow irreversible deterioration mechanisms that can jeopardise their stability in the future. In order to identify such mechanisms at an early stage, and to better understand the cause of visible pathologies, a static structural health monitoring (SHM) system was installed in the church since 2017. Although this monitoring strategy, aimed at the continuous measurement of key slow-varying parameters, has been used successfully in the past to facilitate the diagnosis of this structural typology, the interpretation of data collected by such systems remains a challenging task. One of the main reasons for this is the fact that many monitored damage and deformation features are sensitive to changes caused by environmental conditions. To address this issue, this paper presents the application of a fully automated data analysis procedure to the records collected from the SHM system installed in the church of the monastery of Sant Cugat. The procedure consists of two parts. The first relies on the identification of models that comprehend an Auto-Regressive output and an eXogenous input (ARX) to represent the dynamics of each monitored response using suitable environmental parameters as predictors. The identified models are then used to estimate filtered evolution rates. The second part of the procedure involves classifying each monitored response into pre-defined evolution states based on outcomes from the first part. The main results from the application to the case of the church of the monastery of Sant Cugat are presented and the implications for the diagnosis of the structure are discussed.
CitationMakoond, N. [et al.]. Data analysis using ARX models applied to static structural health monitoring of the Monastery of Sant Cugat. A: International Conference on Structural Analysis of Historical Constructions. "SAHC 2020: 12th International Conference on Structural Analysis of Historical Constructions". Barcelona: International Centre for Numerical Methods in Engineering (CIMNE), 2021, p. 1-12.
URIhttp://hdl.handle.net/2117/341833
Collections
Share: